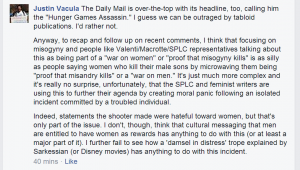 Justin Vacula The Daily Mail is over-the-top with its headline, too, calling him the “Hunger Games Assassin.” I guess we can be outraged by tabloid publications. I’d rather not.

Anyway, to recap and follow up on recent comments, I think that focusing on misogyny and people like Valenti/Macrotte/SPLC representatives talking about this as being part of a “war on women” or “proof that misogyny kills” is as silly as people saying women who kill their male sons by microwaving them being “proof that misandry kills” or a “war on men.” It’s just much more complex and it’s really no surprise, unfortunately, that the SPLC and feminist writers are using this to further their agenda by creating moral panic following an isolated incident committed by a troubled individual.

Indeed, statements the shooter made were hateful toward women, but that’s only part of the issue. I don’t, though, think that cultural messaging that men are entitled to have women as rewards has anything to do with this (or at least a major part of it). I further fail to see how a ‘damsel in distress’ trope explained by Sarkessian (or Disney movies) has anything to do with this incident.

Beware the feminists furthering their dastardly agenda of not being treated like shit any more! Won’t someone please think of the microwaved boys?!