I finally did as I have seen many people urge everyone to do, and took a look at When Women Refuse on tumblr. It’s not fun or placid reading. Be warned.

Arthur Morgan III killed his 2-year-old daughter by throwing her into a creek while strapped into a car seat weighed down with a tire jack. He did it to get back at his ex for breaking off her relationship with him.

“It was because he wanted Imani and he couldn’t have her,” prosecutor Marc LeMieux said. “So he took away the one precious thing in her life.”

Two weeks after my son started kindergarten, the dynamic, amazing principal of his school was murdered by her husband after she told him that she wanted a divorce: http://www.post-gazette.com/local/city/2005/11/19/Flewellen-guilty-of-wife-s-murder/stories/200511190136.

Move ahead to the next page.

Seth Mazzaglia, 31, is charged with first-degree murder in the death of Elizabeth “Lizzi” Marriott. Marriott, of Westborough, Massachusetts, was a 19-year-old student at the University of New Hampshire who was lured to Mazzaglia’s apartment by his girlfriend.

Marriott’s body was thrown into the Piscataqua River and has not been recovered.

INDIANA, Pa. —State police said an Indiana County man accused of a triple homicide used a hunting knife to kill his two young daughters before following his estranged wife home from work, where he also killed her and set fire to both of their houses. 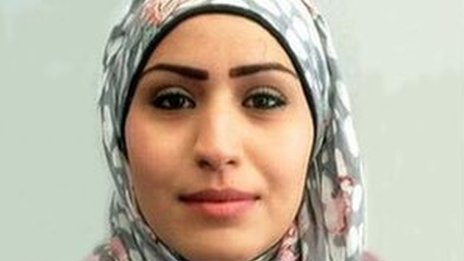 “A mother of three from Manchester was murdered by her husband for becoming “too westernised” and “establishing an independent life”, a court has heard.

Rania Alayed, 25, went missing last June but her body has never been found.

Her husband admits causing her death, claiming he was “possessed of a spirit” when he pushed her, causing her to stumble, fall and bang her head.”

(Image and text from BBC article).

That’s a selection, and it’s only 12 hours back.

But don’t mention the misogyny.