Dan pointed out in a comment on Exodus 33 that

There a famous nineteenth century cartoon of Moses seeing God’s “back parts” that was one of those citied in the prosecution of The Freethinker for blasphemy.

I hit Google and found a Wiki page all about it: Martyrdom of a Freethinker: Blasphemy, Secularism and the Trials of G. W. Foote.

The aim of this project has been to assess the trial of G. W. Foote and his associates W. J. Ramsey and Henry Kempe for blasphemy in 1883. The tr[ia]l was instigated after Foote published the Christmas 1882 number of his magazine the Freethinker, which contained a series of ‘blasphemous’ articles and cartoons.

Dave Silverman’s jokes about God’s butt are part of the Christmas festivities in the US this year. Parallels or what?!

The Secular community produced a number of publications at this time such as the Secular Chronicle, Secular Review, National Reformer and the Agnostic Annual all with varying degrees of success. G. W. Foote was one of the N.S.S’s leading figures, becoming president in 1890, and his Freethinker[3] was the most outrageous and forward of all of these publications. Foote’s witticisms, ridicule and use of cartoons to attack the core values of Christianity, combined with the very affordable price of one penny, threw his atheistic and Secular beliefs out for the masses to absorb or be repulsed by. It was the deliberately confrontational nature of the Freethinker that would arguably lead to its author’s arrest and sentence to twelve months confinement with hard labour.

Again – this is what American Atheists does and is: it’s the most deliberately “outrageous and forward” aka provocative of all the secular and humanist and atheist organizations. It throws atheistic and secular beliefs out for the masses to absorb or be repulsed by, by advertising on billboards and talking to Bill O’Reilly, among other things. It all fits, I tell you!

Which is really pretty horrifying.

The Freethinker began using cartoons early in 1882 with a series called “Comic Bible Sketches”[4] after Foote saw similar items in a French periodical. In his first indictment the image “Divine Illumination” alone earned three counts.<ref>Marsh, p. 141.</ref> The 1882 Christmas number of the Freethinker would use illustrations to their maximum effect when the series “New Life of Christ” was published.[5] The cartoons used in the Freethinker used real lines from the bible and accompanied them with a humorous illustration often taking the words at their most literal. Of particular note is the cartoon “Moses Getting a Back View” in which we see, emerging from the clouds, what appears to be God’s behind in patched trousers. An ambiguous protrusion from his rear – depending on how the reader perceives it – could be a loose bit of material or a classic example of early British toilet humour. 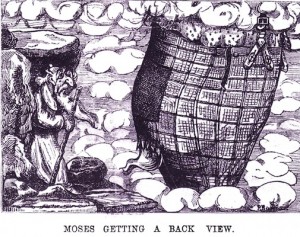 Disgust and closets and out campaigns » « For allegedly hurting religious sentiments