Almost time to leave for Manchester (well not really almost – about four hours). Meanwhile, some more detail about Orlando.

One of the first talks was EllenBeth Wachs, who explained what’s been going on in Polk County, Florida. Theocracy, that’s what. The mayor of Lakeland and the Polk County sheriff are involved in something called Polk Under Prayer. 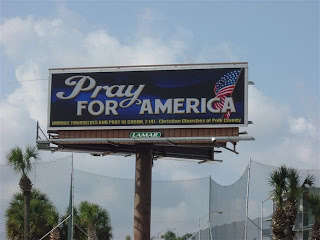 They and others got together and anointed all the roads that border the county, announcing that non-believers should be either arrested or shoved out of the county.

EllenBeth is president of Florida Atheists; she wrote a letter to an official about an illegal transfer of sports equipment from a jail (publicly funded) to a church. She was arrested and handcuffed, and her two employees were held at gunpoint. She was arrested twice more. The details are lurid and horrible. Natalie Rothschild would do well to study them. The whole thing is both shocking and frightening.

There is a Victims page. One of them was Rita’s own child.

Lionel Tiger’s talk was in the afternoon. It was about “male original sin” – everything men do is bad in some way, now that feminism has turned everything upside down. Schools drug all the boys with Ritalin so that they sit there passively like girls. Plus there was the pill, which meant that when men went into bars, all the women were chemically pregnant, which is a turnoff. Plus women don’t have any use for men now. Plus some other things, all equally random. Plus women can just go out and get money and status any time they want to, and men can’t. Plus more random things.

This caused a good deal of rage, I found out afterwards. I found it kind of funny – I suppose because it seemed like such a parody, and so calculated to insult. But in sober truth, it was not a very good talk, because it had no structure at all. It was just some things, offered one after another, with no attempt to get from one to the next in any way other than jumping.

I have to go do some packing type things now.

The mountain is out » « True or false: atheism is the source of all evil