I saw Joseph Hoffmann’s post saying how tiny atheism and atheists now are a few days ago, when it was new, and decided to ignore it*, on the grounds that it was little different from its many predecessors and that nobody except one indefatigable fan was paying any attention so why bother. But then I saw that PZ had done a post on it, and then I saw that Eric had, so starving the beast is not an option, therefore I might as well do my share.

What does it say? That atheism is not good enough.

I cannot imagine a time in the history of unbelief when atheism has appeared more hamfisted, puling, ignorant or unappealing.

Is this because its savants are also described by those adjectives, or because their fans are just being fans, merchandising the cause: t-shirts, coffee mugs, quick fixes, blasphemy competitions, and billboard campaigns? (Axial tilt is the reason for the season: Honest Jethro,  I thought I’d never stop laughing). I mean, who are we unless someone is offended by who we are?  What good is blasphemy if no one is getting their knickers in a knot anymore, for Christ’s sake. How can we “come out” when there’s no one standing outside the closet to yell “Surprise!” at? And, by the way you churchy jerks: we are victims.

Atheism has become a very little idea, an idea that has to be shouted to seem important.  And that is a shame, because God was a big idea, and the rejection of the existence of God was also a big idea, once upon a time.

But now, ah now, the grubby vulgar unlearned rabble have gotten their nasty unlearned hands on it and ruined it. It smells like a locker room now. It has potato chip crumbs all over it. It puts its shoes on the furniture. It chews with its mouth open. It doesn’t quote Goethe.

The post starts with a little display of erudition meant to put us in our place. 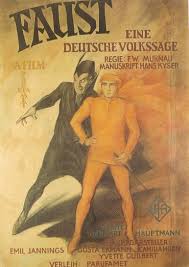 Cool, except that a commenter at Eric’s is a German speaker and says the quoted bit doesn’t make any sense. The “Ihr, Faust” particularly reeks of a machine translator – translating “Yours, Faust,” which isn’t said in German. So that’s pretty funny – a display of snobbish hostility that starts with…ahem.

It gets worse as it goes on. It’s an unpleasant, even embarrassing display. There’s no apparent point to it except to express disdain and superiority.

Atheism has become a very little idea because it is now promoted by little people with a small focus.  These people tend to think that there are two kinds of questions: the questions we have already answered and the questions we will answer tomorrow.  When they were even smaller than they are now, their father asked them every six weeks, “Whadja get in math and science?” When they had children of their own, they asked them, “Whadja get in science and math?”  Which goes to show, people can change.

They eschew mystery, unless it’s connected to a telescopic lens or an electron microscope or a neutrinometer at the Hadron Collider at CERN. “Mystery” is not a state to be enjoyed or celebrated like a good wine or a raven-haired woman with haunting and troubled eyes: it is a temporary state of befuddlement, an unknown sum, an uncharted particle, a glimpse of a distant galaxy, the possibility that Mars supported microbial life.

*Apart from a brief mention on the interview post, that is.