This is such a fantastic response to a mind-numbingly stupid controversy. For those of you who aren’t up to date, Michigan legislators barred Rep. Lisa Brown (D) from speaking in the House after she used the word “vagina” during a debate on an anti-abortion bill. Yes, people are losing their shit over the word “vagina”:

“That comment would be very inappropriate,” [Rep. Rick Johnson (R)] said. “You have young children? Is that something you want them to hear from your state rep?”

Actually, yeah, I wish young children had comprehensive sex education and didn’t respond to the medical terminology for a body part the way you do. Heaven forbid they know about vaginas in addition to arms, stomachs, brains, eyeballs, and what have you. Heaven forbid little girls know about their bodies! Why, we can’t have that – they may start touching their vaginas then! APOCALYPSE!

“What she said was offensive,” said Rep. Mike Callton, R-Nashville. “It was so offensive, I don’t even want to say it in front of women. I would not say that in mixed company.”

Uh…does this guy realize that (most) women have vaginas? I think this says it all: 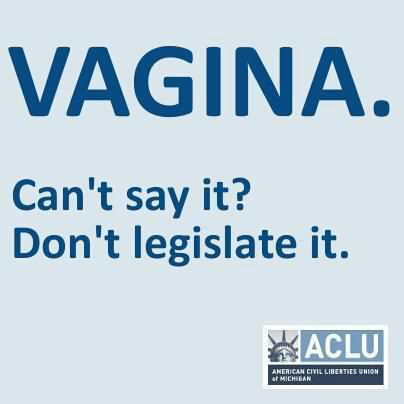 This is such a fabulous idea. If you’re in Michigan, check it out and email your legislators messages of support (or messages of anger, depending on their stance).

This is post 11 of 49 of Blogathon. Donate to the Secular Student Alliance here.

Jesus is a drug » « My favorite Seattle coffee spots