(7:17pm) Well, I’m here. Tonight is Abby Johnson’s talk “Do women have too many rights?” at the University of Washington, sponsored by Students for Life of America and the Catholic Newman Center, who had this ironic poster hung outside the room: 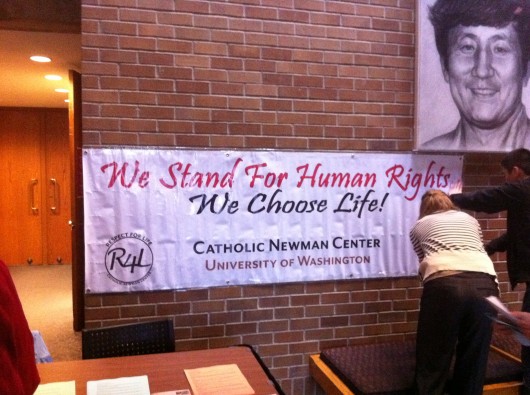 I’ll be making updates throughout the talk, so keep refreshing! 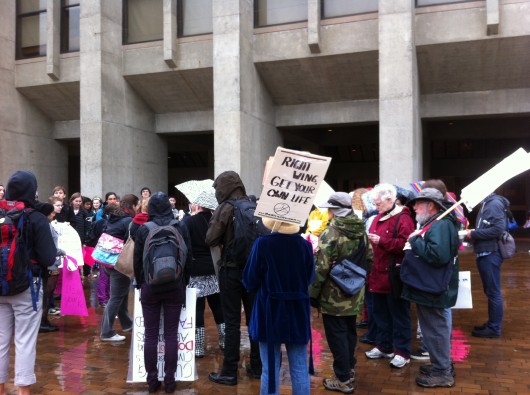 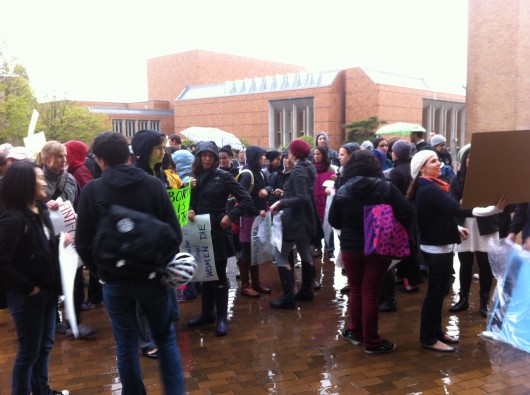 (7:33) On my way in I picked up the various literature they were giving away. Let’s see what goodies I got! Would you like some lies about Planned Parenthood and how contraception works? 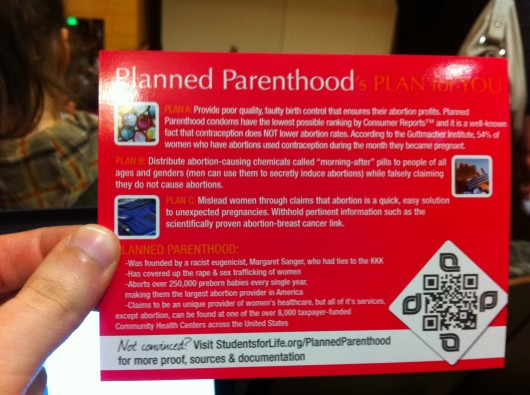 Or maybe the terrifying thought that med students are supporting these unscientific claims: 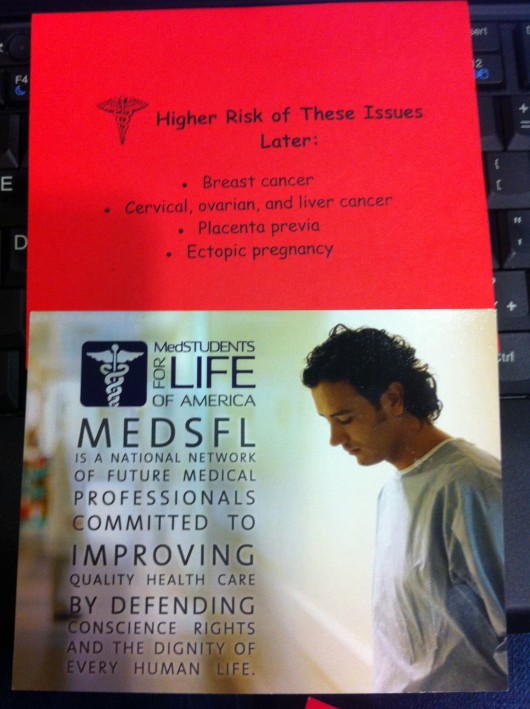 (7:37) I kept ruffling through my various flyers. I was pre-raging when I saw the words “scientific truth,” expecting to read a pile of the typical anti-abortion garbage that parades behind the word “science.” I was pleasantly surprised…the protesters managed to hand out flyers with actual science on it! Wooooooo! Good job, ladies! 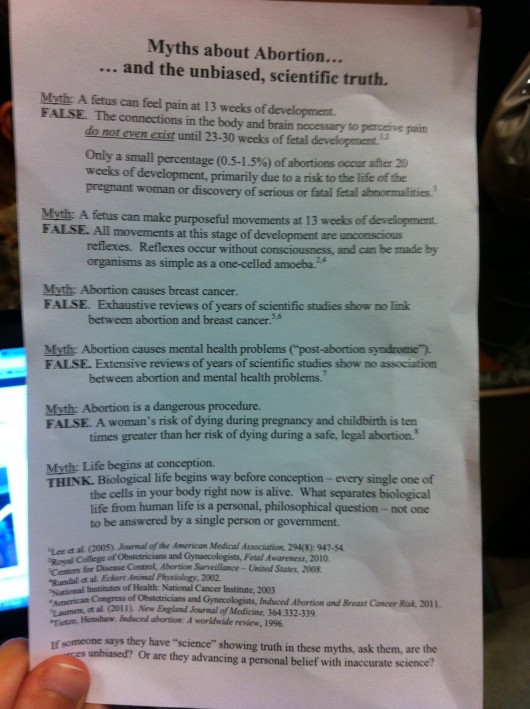 (7:39) The presidents of both student groups just said their names, which caused about a minute of crazy cheering and booing. Oh dear, this is going to be interesting.

(7:40) A police officer just confiscated plastic coat hangers from the people sitting behind me. I feel so much safer now.

(7:42) Some of the feminists behind me keep shouting out and booing loudly to drown out the speaker, and they need to stfu. Let the ignorance speak for itself. You’re coming off as intolerant douchebags.

Abby just got announced (I think, I could barely hear). Standing ovation helped locate where all the pro-lifers are in the room.

(7:45) Well, I’d live blog what Abby is saying, except I can’t hear what she’s saying, and she can’t talk because feminists keep screaming over her. Come on, guys. You sound like brats. This isn’t “freedom of speech” to shout down an invited speaker. Ugh.

(7:46) Abby says supporting Planned Parenthood is “uninformed choice”, and that she hopes there are no male pro-choicers in the audience because pro-choicers don’t want them to have an opinion.

(7:48) She just said pro-choicers want women “to be bought and sold for sex.”

(7:51) Abby said Planned Parenthood is in it to make money. Someone from the audience shouts that they bet she makes a lot of money speaking doing this, and agrees…then adds that she made a lot more money when she was at Planned Parenthood “coercing young girls and killing children.”

(7:53) Abby says that Planned Parenthood has an abortion quota, and they fire people if they don’t meet a monthly quota. Someone shouted “Citation needed!” She responded “I don’t know why they want a citation, because according to them, abortion should be everywhere. Everyone here should be having an abortion.” …I have no idea what that has to do with citations.

(7:55) Abby questions why Planned Parenthood wants every clinic to eventually offer abortion services if they claim to want to reduce unintended pregnancies. “Not about the health of the women. They’re not about keeping women safe. They’re about abortion. They’re about making money. They are not about unintended pregnancies.” Even though, you know, only 3% of PP services are abortion related.

(7:57) Someone just made an announcement that the police were going to start removing people if they keep being disruptive. She couldn’t even get through the announcement without people screaming to drown her out. Abby says she’ll say something that will make sure to upset the pro-choicers so they’ll get kicked out.

(8:02) Photos of the audience. Room is packed. Police officer is looming in the back where all the noisy pro-choicers are. 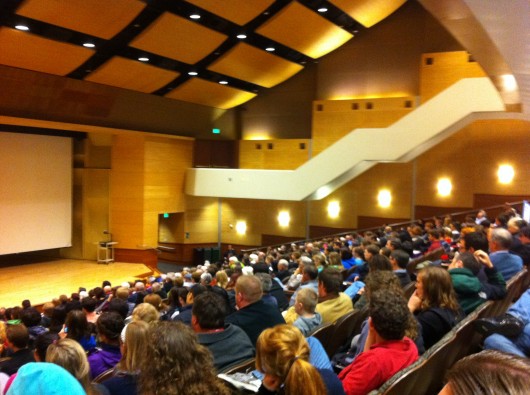 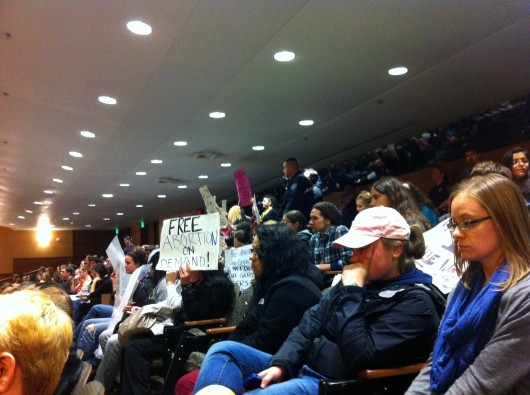 (8:06) Abby is telling her story about watching an abortion performed over an ultrasound, and how the baby tried to flee and move away from the abortion instrument. Even though this has been shown to be a complete fabrication. There was no ultra sound guided abortion performed that day where she worked.

(8:08) “If we saw a two year old in the parking lot and saw a man beating her to death, what would we do? We’d stop them from harming this child.” Yes, a two year old is totally equivalent to a couple week old embryo  ಠ_ಠ “People justify their own hurt by the killing of an innocent.”

(8:13) The most disruptive woman just got escorted out by the police. She started shouting “Women’s rights are under attack, what do you do?” and people replied “Stand up, fight back!” 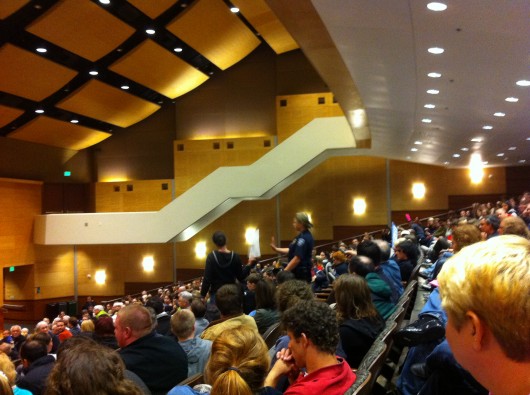 “I know here in the state of Washington you feel discouraged because you’re in the minority. But know you’re not alone. The majority of this country sides with you when it comes to the sanctity of human life.” Blah blah blah circle jerk, claps from the pro-lifers. “Their anger comes from hurt.”

(8:15) “They’re only tolerant of your point of view.” I’m sorry, I am intolerant. I’m intolerant of people taking control over women’s bodies because some sky daddy told them to. I’m intolerant of someone resulting in the death of women because “awwww, a baby duurrr.” This is a more complicated ethical issue than any anti-choicer will admit.

(8:23) Holy crap I don’t know what just happened. Some officer just tackled a woman in the back with general chaos. More people are getting escorted out. 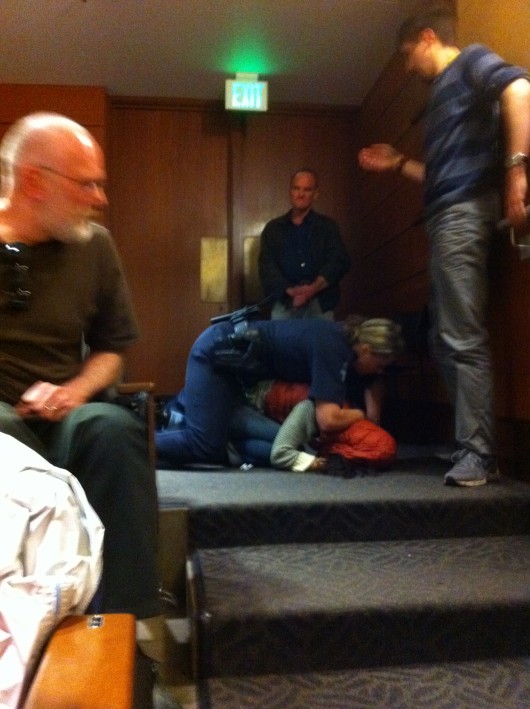 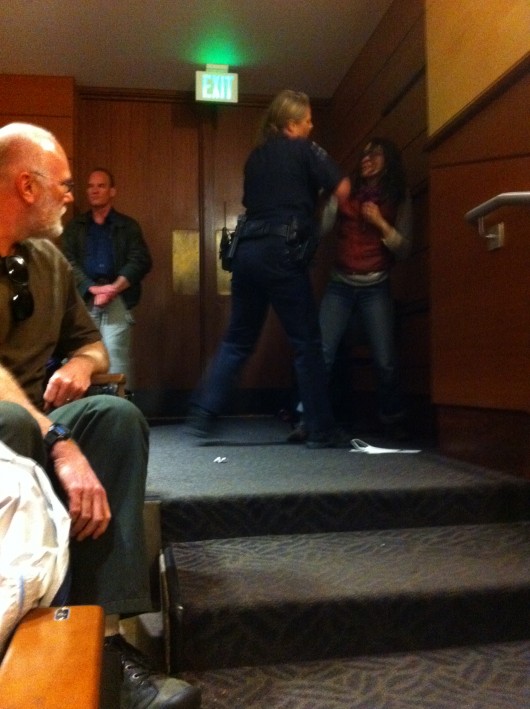 (8:24) “The truth is the truth. If we weren’t speaking the truth in the pro-life moment, THEY wouldn’t be here!” I think that’s a logical fallacy…

(8:27) “The truth is scary and is often offensive. Never be scared to offend someone with the truth.” Oddly I agree with that. Except that, you know, pro-lifers don’t generally present the truth.

Annnddd they just ended the talk with no Q&A because the pro-choicers are so loud and disruptive. Good job, guys *facepalm*

The pro-choicers behind me are loudly chanting “Pro-life, that’s a lie, you don’t care if women die.” I’m sure they’re changing lots of minds  ಠ_ಠ  This was such a shitshow.

(8:32) You know, I was totally expecting to be in a frothy rage at the end of this talk. But I’m just vaguely confused. And hungry.

Look, I consider myself a firebrand. I don’t mince words or hold back. But the people screaming in the back weren’t firebrands…they were obnoxious and accomplished nothing. Did screaming the whole time change any minds? I wish she would have been able to give her dumb talk, then people could have asked her damning questions during the Q&A. But instead it just turned into a giant clusterfuck. I’m actually more angry at the pro-choicers than Abby right now. Blargh.

What, no Hitler? » « When abortion is the more ethical choice