The Stewart Center at Purdue University has a bunch of glass cases that line its hallway where student groups are allowed to put up little displays advertising. Groups get a week reserved, so you see displays rotating through of everything from breast cancer awareness, traditional African dance club, anthropology club, upcoming musical performances, College Republicans, religious clubs…

But apparently an atheist club is just too much for Purdue to handle.

The Society of Non-Theists (which I just officially stopped being President of – was for 3 years) finally got a display case of our own. I helped our former treasurer put up the display at 3:15pm on Monday. It included a sign saying “This is what non-theists look like” with happy photos of our club members, our benign club t-shirt, some atheism-related books, and Darwin fish stickers.

And now it’s covered in marker with “In the beginning, God created…” 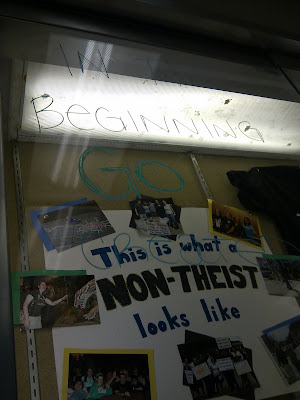 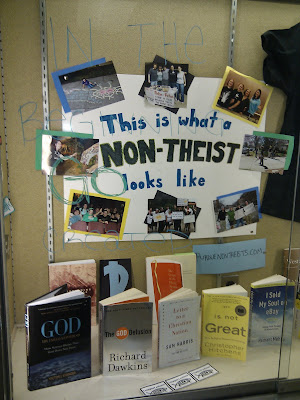 Thank you, vandal, for perfectly illustrating why we need this club on campus. Because we can’t even say we exist in the most friendly way possible without someone trying to come by and shut us up or put is down. Though it really doesn’t surprise me; our flyers are constantly vandalized like this (or just torn down). Makes sense that they wouldn’t stop because of some silly glass. Foolish of me to think the display would last untouched for at least 48 hours.

I’ve never seen something like this happen to another case, not the Episcopalians, the Pagans, or the Muslims (the Islamic case is right next to ours and untouched). I guess Purdue still has a long way to go. Off to email this to the proper Purdue people, though they’re just going to tell me there’s nothing they can do…again.

I’m done, weeeee! » « Well, at least the Catholics will just come out and say it