From the webmaster: while our staff gets ready to enjoy Passover/Easter weekend, I thought I would share this article from November of 2009.  The village may have won an award for transparency in 2015, but we missed the opportunity to redefine open government.

The village of Bolingbrook has decided not to participate in Google’s top secret test of Google Government. 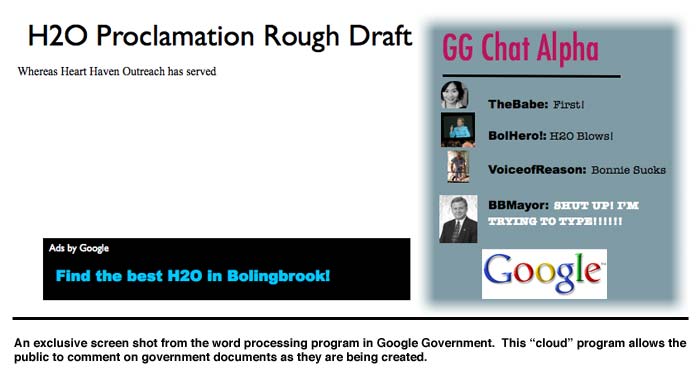 A screenshot of Bolingbrook’s version of Google Government. It was tested in 2009 but never purchased.

“We are happy with Munis.” Said an anonymous source who wants to be a spokesperson for the village. “While this alpha test is free, we feel that we get more value when we actually pay for something.”

Although Google denies its existence, an Internet site claims that Google is working on applications that could change how democratic governments are run and could eliminate the need for politicians.

Sources who attended Google’s presentation with Mayor Roger Claar deny that it would eliminate politicians, but said it would be the ultimate in government transparency.

Alberts explained that cloud computing really means that the programs and files would be on offsite servers instead of on individual computers. This would save the village money because instead of buying a license for each computer, the village can buy cheap netbooks and employees could do all of their work using web browsers.

“How do we know the data will be safe?”

“How secure will it be?”

Claar explained that he was still “an AOL man” and didn’t understand all “this cloud stuff.” He asked why all the information needed to be online.

Alberts replied that Google Government is committed to open government. By putting all documents online, the public can easily access any document. This would save the village thousands in FOIA fees because any document would be available at the click of a button.

Claar’s eyes widened. “What about Bonnie and her fishing expeditions?”

“With Google Government, all documents are available. If she claims she can’t find a document, the residents will think she’s either computer illiterate or has mental software issues.”

Alberts added that putting government information online makes it easier for residents to help out the village. “Crowdsourcing” could save tax dollars that otherwise would have gone to outside consultants.

“What are some examples of crowdsourcing?”

“How many aliens have they found?”

“Good point. How about Galaxy Zoo? They can classify galaxies faster than computers.”

“If you say so.” Replied Claar.

Alberts continued by saying that Google Government was more than a word processing and data storage application. He said it could replace the trustees. Google would provide free wifi to every village resident. By monitoring the residents’ internet traffic, as well as scanning their Google documents for certain keywords, Google Government can create six virtual trustees that can accurately reflect the residents’ moods and opinions.

When Claar asked what his role would be in this new government, Alberts explained that Claar would be the “Mayor Sysop.” He would vote in case of a tie, report any glitches to Google, and veto any AI ordinances “with obvious bugs.”

Alberts defended virtual trustees because the village wouldn’t have to pay them, elections would be unnecessary because they’re constantly sampling public opinion, and they couldn’t be swayed by “outside influences.”

When Claar asked how his campaign fund fits in this new structure, Alberts smiled.

“Of course you would still have to run for reelection, but I think of your campaign fund as bloatware,” Albert replied as Claar started to turn red. “A campaign fund should only be used for getting reelected. You seem to use your fund for other things, like cars, overseas trips, and scholarships. I think you should divide your campaign funds into separate funds. One for travel, one for reelection, one for scholarships, and one for your personal discretion. We can use Blogger to set up a blog for each fund, set you up with Google Checkout, and then you can watch each of those funds grow. Because the residents of Bolingbrook can choose how to donate to you, I’ll bet that you will raise even more money for your charities because people who don’t support your reelection will be more likely to donate to the other funds.”

Sources say that Claar stood up and told Alberts that he was rejecting Google Government.

“I don’t understand why people are so obsessed with my personal fund!” Yelled Claar. “My campaign fund gives me the flexibility to deal with high-end executives! Because as much as I love Nancy’s Pizza, not all of them like pizza. They want expensive meals that you can only get in Chicago. Thanks to Illinois’ campaign laws, they can’t offer to pay for any of my meals or rounds of golf. If I had to pay for things with my six-figure salary, I would have to file for bankruptcy! How would that make Bolingbrook look?”

Alberts, according to the sources, apologized for offending Claar, then said he would pitch Google Government to Lisle’s Mayor Broda instead.

“I e-mailed my initial presentation to Trustee Brondyke.” Said Alberts. “She said that if I set foot in Lisle Village Hall, she would help me demonstrate medieval stretching techniques. That should be very educational.”

When asked to comment, Claar denied speaking to any representatives from Google. “Google is great for searching the Internet, but I don’t–Hey! Get off of my patio!”

This reporter then heard the sound of breaking glass.

“Google’s maps have guided me here, and its street view has given me the vision to find you and lead you to the Church of Google!”

“Yes  Join us as because you don’t need faith to believe that Google is the only omniscient being on Earth!”

“Let me Google that!”

This reporter then heard a scuffle, followed by the man screaming in pain. Two other men read the man his rights. The man replied that his First Amendment rights were being violated because he won’t be able to access the Village’s wifi network in his cell.

Second later, Claar picked up the phone and replied, “My village has too many idiots!”