Content notice: This post deals with the Justice Brett Kavanaugh.  If you are dealing with issues related to sexual assault, you may wish to visit RAINN. 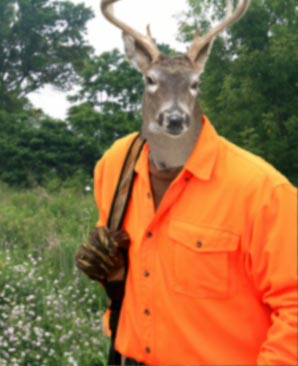 File photo of a weredeer.

An alleged fight between several wereskunks and weredeer last Friday ended in the evacuation of Regal Bolingbrook Stadium theaters.  The Department of Paranormal Affairs arrested three weredeer, and a wereskunk after the incident and released the other creatures.

Most eyewitnesses agree that someone pulled a fire alarm, and staff members evacuated the theater.  Many attendees say they say they saw nothing unusual during the evacuation. Staff members who spoke anonymously said they were instructed not to look at security monitors, or to use the rear entrances.

“I was about to fall asleep during Peppermint when the doors by the screen flew open,” said Beth, who did not wish to reveal her last name.  “These tall weredeer staggered into our theater.  They were chanting, ‘We love beer!  We love Kavanaugh!’”

According to Beth and her friend Blake, several wereskunks transformed into their half-human, half-skunk form and approached the weredeer.

“The weredeer accused the wereskunks of ‘hogging’ women,” said Blake.  “At first I was terrified.  Then one of the weredeer said he was the new Buck of Bolingbrook.  I guess that’s an important leader or something like that.  I don’t know.”

Both Beth and Blake agree that the Buck said he was leading the feral weredeer out of the woods and back into Bolingbrook.  The Buck then actually said that feral weredeer had the first choice of all the women in Bolingbrook.  According to the Buck, the appointment of Kavanaugh meant that the agreement between the feral weredeer and the Bolingbrook Jaycees was void.  The agreement states that weredeer who refuse to abide by human dating and relationship norms should move to the wilderness and only mate with deer.  Weredeer can only produce offspring if they have sex with a human or deer.

“I was so disgusted to hear that weredeer say that if human females didn’t want to mate with weredeer, they shouldn’t be in Bolingbrook,” said Beth.  “I am not a sex object!  I am a person.  They made a bad week even worse.”

“The wereskunks stood up for humanity,” said Blake.  “They said all mating should be consensual.  Maybe skunks aren’t so bad after all.  I just wish they’d leave our garbage alone, or pay for our garbage bins.”

Both witnesses say that after several minutes, someone set off a fire alarm.  Then a wereskunk charged into the room, and all the shapeshifters started fighting each other.  During the brawl, Beth and Blake escaped the theater.  Tactical officers from the Department of Paranormal Affairs.  The officers stormed the theater, while Beth and Blake were taken to a safe location.  They agreed not to tell the mainstream media what happened or post on social media about the incident.

“They haven’t talked to us since then,” said Beth.  “Why should I be surprised?  We can’t hurt the reputation of a very important weredeer, right?  Seriously, I love Bolingbrook, but I hate (expletive deleted) weredeer.”

The Department of Paranormal Affairs released the following statement:  “The US Supreme Court has no jurisdiction over paranormal affairs in Bolingbrook.  The Illuminati does.  The village and the Illuminati will continue to enforce the Jaycee Accords.  Any weredeer found violating the accords will either be escorted out of Bolingbrook or put down.”

In the background, a man who sounded like Claar said: “It looks so real, Charlene.”

“Yes, and we can make it say whatever we want.”

After some keyboard clicks, a male voice said, “I met Mayor Roger Claar.  He’s right, and his foes are stupid liars!”

“Igor says they are working on the way to integrate this imaging technology with their prototype bots.  By 2020, these bots should be able to create their own social media videos.  Imagine bots that can post videos seconds after a major political event.  Oh!  One of them just finished scanning all the posts in Bolingbrook Politics. Let’s see what kind of video it produced.”

A keyboard clicked, and the male voice spoke again:  “Village spending annoys me.  Debt scares me.  Taxes enrage me.  I can do a better job than our current elected officials.  Roger Claar is the best corrupt mayor in the history of Bolingbrook!  Let’s argue!”

“Needs work,” said the man who sounded like Claar.