Will the 2042 Winter Olympics be held in Bolingbrook?  Sources inside village hall say the village will bid for the games. 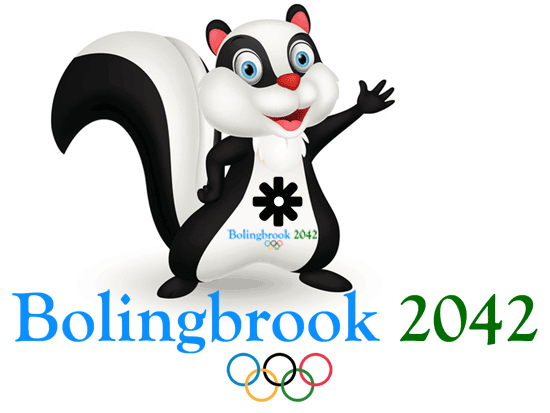 An alleged graphic of Snowy The Winter Olympic Skunk, the alleged mascot for Bolingbrook’s Olympic bid.

“We don’t have mountains, or an Olympic stadium, or the right climate,” said one source.  “But why should that stop us?”

A member of the Bolingbrook STEM Association confirmed the planned bid.  “Roger came up to me and said we needed to design a winter Olympic complex,” she said.  “I laughed until I realized that he was serious.  He said former Trustee Leroy Brown told him that when you believe in God, you can do build anything.  Since I believe in God, Roger told me that I shouldn’t have any problem designing it.”  She added:  “Roger wanted to host an Olympics because it would humiliate Chicago if Bolingbrook won its bid while Chicago didn’t.  I asked why he wanted to host a winter Olympics instead of a summer Olympics.  He said he’d show me pictures of his granddaughter if I stopped asking questions.”

According to the sources, the bid would commit the village to the most significant infrastructure project since the village’s founding.  It includes a promise to add 100,000 seats to Rocket Ice Arena.  It also promises to add a dome to the Bolingbrook High School Stadium so it could also be used to host events, like speed skating.  The Leroy Brown Olympic Village would be built on the site now occupied by Bolingbrook Commons.  Bolingbrook, according to the bid, would work with the village of Lisle to raise the height of Four Lakes’ ski hill by “several thousand feet” to make it suitable for downhill events.

Sources say that the plan is for the village to use the revenue from the sale of its remaining lots at Americana Estates to pay for its Olympic plans.  The sources said if the sales didn’t generate enough money, the village charter would be amended so the village would be required to issue the necessary bonds in 2032.

“This way, Roger can keep his promise not to add to the village’s debt because the bonds will be issued long after he’s out of office.  It will be some other mayor’s problem.”

Anonymous economic advisors for the Bolingbrook United party condemned the proposed bid.  According to them, the debt from preparing for an Olympics can take decades to pay off.  They noted that it took Montreal thirty years to pay off its debt from hosting the 1976 Summer Olympics.

“This could turn out to be the most expensive bid in Olympic history,” said one of the economists.  “That’s before taking global warming into account.  Olympic games are a terrible investment for any community except Los Angeles.  The best move for Bolingbrook would be not to bid for any Olympic games.”

An anonymous member of the village staff defended the proposed bid.  “Some people only think about negatives.  I’d rather think about the positives— Like the billions of people watching a future Mayor Claar opening the Olympics, and the world falling in love with our mascot, Snowy the Winter Olympic Skunk.”

A receptionist for Claar said he was in a meeting with a trustee and could not be disturbed.

In the background, a man said, “You know, Bob might be on to something.”

“I’ll ignore that you said the “B” word, and give you a few seconds to explain yourself.”

“Sorry.  Um, even though we outsourced production of the village directory to the Chamber of Commerce, we still are responsible for any mistakes that are in it.”

“Are you attacking the Village staff?”

“Not at all.  Our staff members want to do a good job.  The flaw is with the process behind producing the directory, not them.  Shouldn’t we review the process and fix it so we can empower our staff to fix errors in the directory?”

“Why?  Every time an isolated mistake happens, Bob points it out, and I tell a sob story about the village employee involved.  The voters feel sympathy towards my village staff, and I make Mr. B look like a bad person.  When I make him look bad, I hurt his party and help our party.  Don’t think of these isolated incidents as problems to be solved.  Think of them as opportunities to exploit.”

“Okay?  So the message we want to send to our staff is—”

“Don’t be afraid to screw up.”