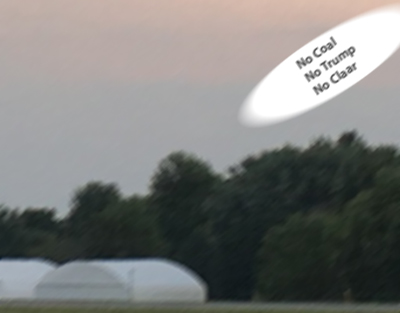 UFO crew displays its dislike of the rule requiring all UFOs to by fueled by burning coal.

Enraged by Melania Trump’s announcement that visiting UFOs must be fueled by coal, thousands of aliens protested and rioted at Bolingbrook’s Clow UFO Base.

While coal can be used to fuel some alien reactors, the new coal requirements say any alien craft landing at an Illuminati controlled UFO Base must be fueled by burning coal.

Mrs. Trump explained in a video presentation: “We have taken away Appalachia’s economic development funding, their clean water, their clean air, their health care, and their environment!  It is only fair that you take and burn their coal!”  She added that since natural gas is so cheap, it is unlikely that there will be any new coal plants built in the United States.

When some alien economists pointed out that requiring coal powered UFOs could reduce interstellar traffic to nearly zero, Mrs. Trump said she didn’t care.  “The coal industry and the coal miner unions donated money to my husband’s campaign.  They want results, and we will make you deliver those results!”

Another alien scientist asked why it wouldn’t be better for Earth to buy all the coal in North America and dump it on Venus.  “Venus can’t get any worse, Earth will have its carbon stockpile reduced, and the miners will get their money.”  Mrs. Trump replied that this plan would require congressional approval, “And we have other plans for the surviving members of Congress.”

Following the announcement, thousands of aliens marched to the Illuminati embassy to protest.  300 were arrested for attempting to breach the forcefield.  Others chanted anti-Illuminati slogans and called for the New World Order to retake Clow.

Merchant Blohegil said she attended the protest because she was furious at what it does to her business.  “There’s free trade.  There’s protectionism.  There’s communism.  Then there’s (expletive deleted) the free market!  Guess what I think this is!”

Sxop Xlop was angry as well:  “The Interstellar Commonwealth has gone to great pains to ensure that we do not disrupt human cultures and protect the environment.  Now they want to command us to pollute Earth?  No!  I will not obey President Fake Human Trump!”

“They say give back!  We say (expletive deleted) that!  They say steampunk!  We say cyberpunk!”

While there were no fatalities from the attacks, dozens of security personnel were treated for exposure to stink bombs.

The violence and protests subsided once it was announced that the coal requirements were suspended until the Interstellar Trade Organization could review them.

Bolingbrook Mayor Roger Claar estimated the damage at “a few billion dollars,” but insisted that Clow’s security had everything under control.  “Aliens riot at Clow.  What else is new?”