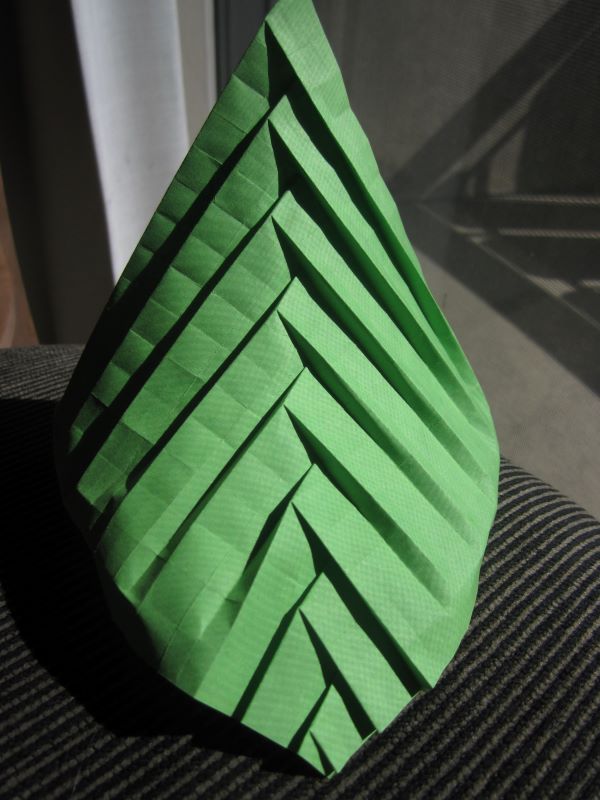 Stairway leaf, a design by me

You can make some pretty things with relatively simple patterns in origami.  This model is the result of some experimentation with pleats.  It has two parallel sets of pleats, which meet along a zig zag line.  This is one of those models that when I stare at it for long enough, I start thinking about more things I could do with this.

“Secure in my/his/their masculinity” is a common expression, but what does it mean? Some readers may find this obvious, but permit me a bit of exploration, to see what we can learn.

In a basic search, I found several low quality listicles, which I take to represent what the common person thinks (as opposed to more scholarly interpretations). The listicles say that you can tell when a man is insecure in his masculinity if he tries to one-up everyone, is homophobic, or avoids anything girly, and so on. In short, masculine insecurity is evidenced by toxic masculinity.

The underlying theory seems to be that insecurity about masculinity causes toxic masculinity. And, by the way, this theory seems to be correct. Another article I found in a basic search describes psychological studies, where men were given tests of “masculinity” and physical strength. They received randomized scores, and the men who were told they scored poorly reported higher aggression, would exaggerate their height, and be more likely to avoid products perceived as feminine.

END_OF_DOCUMENT_TOKEN_TO_BE_REPLACED

I’ve always celebrated Thanksgiving more than once a year. Once with my dad’s family, and once with my mother’s. My dad’s family, who is White, would have these relatively traditional gatherings around a big table, where we pass the turkey and gravy and mashed potatoes in a sort of ritualized cooperation. My mother’s family, who is Chinese Filipino, would treat it like yet another pot luck, with with the traditional Thanksgiving foods present but not playing a central role in the mix of Chinese, Filipino, and American dishes. People would line up to put food on their plates, and unceremoniously scatter across three or four tables of various shapes and sizes.

Once I started visiting my husband’s family, we started alternating Thanksgivings. One year, we would visit his parents, and the next year we would visit mine. My mother was always disappointed by this, so we formed a new tradition: early Thanksgiving. Now we celebrate two Thanksgivings on different weeks, with different sides of the family.  I’ve already celebrated my first Thanksgiving this year.

When I started reading atheist blogs in the late 2000s, I observed another kind of Thanksgiving tradition. I’m not sure readers today would be familiar with it, because it might have died with the atheist blogosphere. But basically, atheists would write in defense of their celebration of Thanksgiving.

END_OF_DOCUMENT_TOKEN_TO_BE_REPLACED

While I’ve been quiet here in the past month, I’ve been busy elsewhere.  The Ace Community Survey released a new report, and survey.  And on The Asexual Agenda, I wrote about Jones from Gunnerkrigg Court, and about a constructionist view of attraction.   Finally, the Ace Journal Club read an evolutionary psychology paper.

Newton’s Fractal (which Newton knew nothing about) | 3Blue1Brown (video, 26 min) – 3b1b explains the Newton’s Fractals and where they come from, using some excellent visuals. I’ve explained before how my avatar is a Newton’s fractal–albeit from a non-polynomial function. Really I just messed around with weird complex functions until I got stuff that looked nice. Having had that experience, I’m a bit disappointed that people often stop at polynomials.  They’re missing out. Still, it’s rare to get visuals that are as good as in this video.  Also see part 2 about the connection to Mandelbrot sets.

How Bisexuality Changed Video Games | verilybitchie (video, 54 min) – An entertaining deep dive on playersexuality, and related topics.  Although many romanceable characters are mechanically bisexual, it’s often written with straight or gay players in mind, and the only way for the player to really express bisexuality is by romancing multiple people, which games treat as bad.

END_OF_DOCUMENT_TOKEN_TO_BE_REPLACED

In my previous post, I talked about the German Tank Problem. And while discussing the frequentist approach, I defined the “unbiased” estimator. But seriously, unbiased estimators are really weird. Let me show you an example, in the form of a Monty-Hall-like problem.

Suppose that I’ve set up three closed doors A, B, and C, each with a prize behind it. Two of them have $1000, and one has $2000. Doors A and B don’t really matter, your prize is behind door C. How much is this prize worth to you? But before you answer, please, look behind one of the other doors, A or B.

END_OF_DOCUMENT_TOKEN_TO_BE_REPLACED

The German Tank Problem supposes that there are N tanks with ID numbers from 1 to N. We don’t know what N is, but have looked at a single tank’s ID number, which we’ll denote m. How would you estimate N?

This is a well-known problem in statistics, and you’re welcome to go over to Wikipedia and decide that Wikipedia is a better resource than I am and, you know, fair. But, the particular angle I would like to take, is using this problem to understand the difference between Bayesian and frequentist approaches to statistics.

I’m aware of the popular framing of Bayesian and frequentist approaches as being in an adversarial relationship. I’ve heard some people say they believe that one approach is the correct one and the other doesn’t make any sense. I’m not going to go there. My stance is that even if you’re on Team Bayes or whatever, it’s probably good to understand both approaches at least on a technical level, and that’s what I seek to explain.

END_OF_DOCUMENT_TOKEN_TO_BE_REPLACED 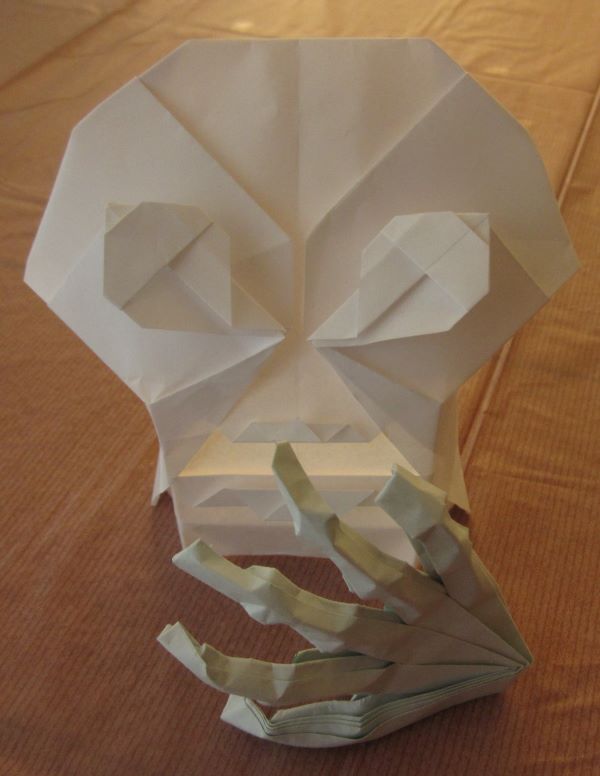 Skull by Jo Nakashima, and Skeleton Hand by Jeremy Shafer

The other day, my mother said that she didn’t celebrate Halloween growing up, they only had All Saints Day.  I think she’s a lot more enthusiastic about Halloween than I am.  Anyway, here’s a Halloween themed origami I made once, as part of the local origami club.  I think the skull is supposed to be made with one-sided black paper, to contrast the color of the eyes with the rest, but clearly I didn’t plan ahead.  Another fortuitous accident, is that once we had the skull and the hand, everyone’s skull was giggling.