Netflix’s algorithm engages in queerbaiting. Whenever we browse movies and TV shows, Netflix has a clear preference for showing promo images with attractive men looking meaningfully into each others’ eyes.

I think many of these shows actually do have some sort of same-sex relationship, but they’re incidental or on the margins. Others, I have a suspicion that they actually don’t have any queer content at all! And then there are some that I thought must be a trick, with hardly any queer content to speak of, but after some research, I think are actually fairly queer. Netflix’s tendency to show the most homoerotic marketing material regardless of actual content sure makes it difficult to distinguish.

I’m very sorry but I’m going to have to show you some homoerotic imagery. Purely for scientific purposes, of course.

END_OF_DOCUMENT_TOKEN_TO_BE_REPLACED

This is a review of both the TV series, and the webcomic.  The reader should be aware that I greatly favor the critical review, so it should come as no shock that that’s what this is.  However, this is a space where we are free to like or dislike things–or both, as the case may be.

Heartstopper is a Netflix TV series based on the free online graphic novel (that is to say, webcomic) of the same name. The first season released to critical acclaim, and people have been talking about it as the hot new thing. I recently watched the series with my husband, and we both had the same reaction: The series is sweet and well-done, but extremely cookie-cutter.

Many viewers found the show to be novel and refreshing, but we found it to be very much the opposite. Why is that? It must have something to do with the sort of media we consume. My husband and I both watch a lot of gay movies, and I’ve read a lot of BL webcomics—including the original Heartstopper. Within that space, the high school coming out slash romance genre is extremely common, and Heartstopper is practically a tour of the most well-worn tropes.

END_OF_DOCUMENT_TOKEN_TO_BE_REPLACED

In case you missed it, I wrote about how gray-asexuality is portrayed in mainstream media.  Gray-asexuality is a highly prevalent, as well as historically significant group within the asexual spectrum, but you wouldn’t know it from media coverage, which tends to ignore gray-asexuality entirely.

Samantha’s ‘Oo Antava’ item song attempts to subvert the male gaze, but does it? | The News Minute – This is a random article I found by looking up some Indian pop music, but it’s a fascinating glimpse into feminist arguments from another part of the world.  According to the article, many “item songs” in Indian cinema engage in objectification of women, but this particular song instead scrutinizes the male gaze, saying men will ogle regardless of what a woman wears.  But there’s criticism that the song excuses men by depicting men’s lust as automatic or uncontrollable.  And on the other end, a men’s association apparently filed a lawsuit against the song for portraying men too negatively?  Nobody knows anything about that lawsuit, but from an American perspective it’s the most baffling aspect.

END_OF_DOCUMENT_TOKEN_TO_BE_REPLACED

A while back I wrote about my forays into electronic music production. I dropped that project for quite a while, but when I went back to listen to what I had produced, I still really liked it. So I went back, tweaked things to make it presentable, and released an EP on Bandcamp.

I could say more about the music, or the experience of making it, but probably not unless readers express interest. It’s a modest project, and I’m pleased if even a few people like it. I’d like to make more music in the future.

Blogging has been declining. I don’t have much evidence, aside from Google trends, but it’s fairly obvious from personal experience. For example, atheist blogs used to be a huge cultural force, with big celebrities and countless indie blogs, and now it’s sort of a backwater with a few networks of marginal relevance, and a mostly dead indie space. And no other blogosphere has replaced what atheist blogging once was.

Maybe his just has to do with my personal circles? As a reality check I tried looking up the question. I learned, according to Google, that blogging is bigger than ever, and is still a great way to make money by advertising your product! Okay, so I should specify that I’m not interested in all blogs, because marketing blogs can go die in a fire. I’m talking about personal blogs, and more specifically essay blogs. Essay blogs are declining, that’s what I meant.

Essays aren’t dead though, because it is now popular to present essays in video format. The video essay is a booming genre, and I for one think it’s great, for the same reason essay blogs are great.  But there are also some significant differences.

END_OF_DOCUMENT_TOKEN_TO_BE_REPLACED 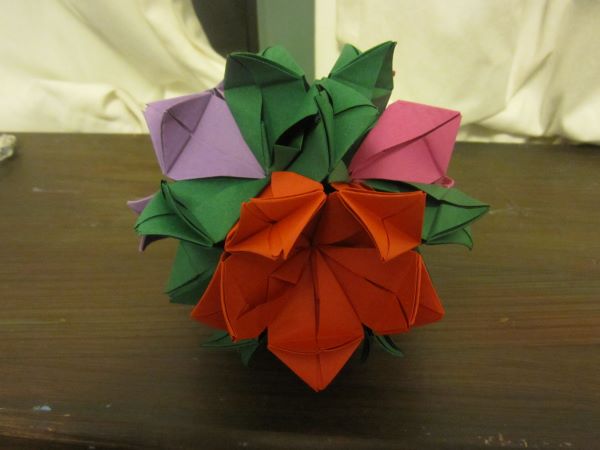 This is a 30-piece floral ball, or kusudama.  Not too much to say about it.

Except: this is one of the oldest origami photos I’ve posted, from 2013.  Whatever happened to this model?  I can’t find it in storage, and don’t remember giving it away.  I have to imagine it got damaged or destroyed.  Nothing lasts forever.  I often think back to a passage from origamist Tomoko Fuse:

Sometimes I burn origami that have been crushed or that prove unsuccessful in one way or another.  As I watch the green, blue, and orange flames (probably caused by the pigments used to color the paper), I reflect on the sad ephemerality of those animal forms and starlike solid-geometric figures and on the time I spent engrossed in creating them.

Words to live by.  Enjoy the rest of spring.