Recently there’s been a music meme going around, “Red Dress” by Sarah Brand:

It sounds to me that the singer has some variety of tone deafness, causing her pitch to be consistently off, sometimes by more than 50 cents. It should be said that many singers bend their pitch slightly, still feeling like the correct note but adding texture and heightening emotional expression. To my ears, Sarah Brand is doing something similar, but in a much broader range such that to many listeners it sounds like it’s no longer the correct note.

And I love it. It’s fun and catchy, and I would listen to more. I’m not even joking.

END_OF_DOCUMENT_TOKEN_TO_BE_REPLACED

Last month I played and discussed Tell Me Why, but today I want to discuss the genre that Tell Me Why is part of. The Steam storefront calls it “choices matter”–and just because Steam gives it a tag doesn’t mean we need to think of it as a genre, but I think it’s a hell lot more informative than just calling it a walking sim. After all, the major form of engagement with the game is not walking, it’s choosing.

“Choices matter” is a genre that could encompass many games, from The Walking Dead, The Stanley Parable, Undertale, and Mass Effect, to (some) visual novels, and choose your own adventure books. In all of these, you make choices, and the game responds to your choices in a significant way, or at least appears to. However, choices don’t always serve the same purpose. I’ve identified at least 4 distinct purposes.

END_OF_DOCUMENT_TOKEN_TO_BE_REPLACED

I am publicly retracting and apologizing for a blog post I published on my blog A Trivial Knot in March of 2020. That post is “Trump’s Atrocious Trolley Tradeoff“. The essay contained a political discussion of the pandemic, and speculation on possible outcomes, and most regrettably, a comparison to the number of deaths in the Holocaust. This problem with this was pointed out by my (now former) coblogger and friend Sara, whom I treated rudely. Afterwards, Sara chose to disassociate herself with The Asexual Agenda, and the local ace meetup group.

The reason this has been much delayed is that Sara asked me not to explain why she left. However, I could have still retracted the essay without mentioning her. In any case, Sara has finally come forward to explain the problem.

END_OF_DOCUMENT_TOKEN_TO_BE_REPLACED

Since the issue at hand is about how to refer to people in the US of Latin American origin or descent, and since I am deliberately not favoring any particular word, in this post I will use “Latino/x/e” to describe this group.

In a previous post, I discussed why we grant members of a group special authority to talk about issues related to that group. In this post, as a case study, I examine the word “Latinx”, a contentious gender-neutral term for people of Latin American origin or descent. It’s commonly argued that this word should not be used, on the basis that Latino/x/e people themselves don’t like it, and presumably they have special authority to speak on the matter. I’ve also heard people say that “Latinx” must be coming from misguided non-Latino/x/e people.

As an example of these arguments, there was a recent NYT essay that argued that “Latinx” fails because it is rejected by 97% of Latino/x/e people in the US.

But something that the essay completely ignores, is that “Latinx” has strong associations with specifically queer Latino/x/e people. This is acknowledged by the Pew Research poll that the essay is based on:

The first substantial rise in searches [for “Latinx”] (relative to all online searches) appeared in June 2016 following a shooting at Pulse nightclub, an LGBTQ dance club in Orlando, Florida, that was hosting its Latin Night on the date of the attack.

END_OF_DOCUMENT_TOKEN_TO_BE_REPLACED

In a social justice context, it’s taken as a standard principle that when talking about group X, the ultimate authorities are members of group X. From this principle, people draw a variety of conclusions and cultural practices. For example:

Direct expertise has justifications, but also limitations. Trusting experts is a useful and justifiable rule of thumb. However, like other forms of expertise, there are cases where experts are wrong, or where they disagree. I also find some of the conclusions listed above to be unwarranted. In this article, I’ll explore the source and scope of direct expertise.

END_OF_DOCUMENT_TOKEN_TO_BE_REPLACED

Boys Don’t Cry (Except When They Do) | Pop Culture Detective (video, 27:25 min) – A detailed examination of movie tropes surrounding men crying.  Have I ever told the anecdote about how I used to cry when I was in elementary school?  The other kids would make fun of me, and I actually went to counseling because of it.  My counselor was a wonderful person who taught me a lot of important life skills, so I can’t say I regret how it turned out.  Telling boys they can’t cry is bad though, and hits really young.

Queer Games Criticism in 2021 (so far) | Critical Distance – It’s a link roundup of queer games criticism.  Yes, I’m plugging this partly because I’m in it.

If I were to highlight one piece, it would be Speedrunning Undertale helped me understand my gender better.  I’ve been reading queer games criticism for many years, so I’m very aware of the idea that speedrunning is “queer” in the sense of subverting the normative goals of playing a game–much like how queer people subvert the normative goal of forming a heteronormative family.  If that sounds weird, well that’s what academic queer theory is always like.  I think I’m not alone in having a hard time actually buying the theory that speedrunning is queer.  But this essay uses personal narrative to make it much more compelling, so I really appreciated it.

END_OF_DOCUMENT_TOKEN_TO_BE_REPLACED 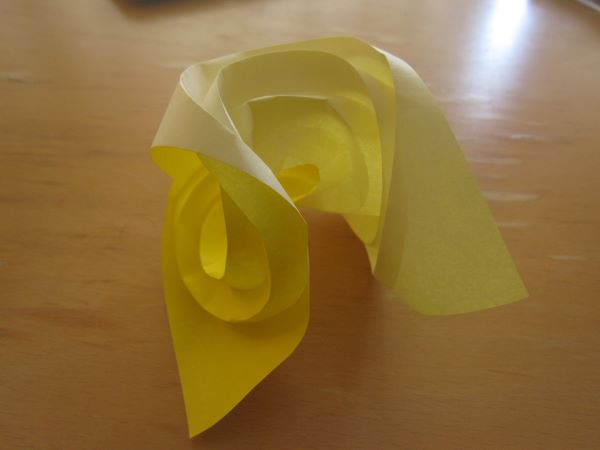 This model dates back to when I was experimenting with curved creases.  A very simple model is to make alternating creases in concentric circles, and cut out the center of the paper.  To me, it’s such a simple thing, but I’ve heard a lot of people really like this one.

If you like this one, check out the sculptures of Erik Demaine!