cn: death and homophobia. I do not recommend reading this if you are one of my relatives. I do not desire, and will not respond to any expressions of condolence, or general concern for my personal wellbeing.

My grandfather grew up in Pennsylvania Dutch Country. Very conservative, very religious, and his neighbors were Amish. He left his background behind, moving to California, becoming a professional scientist, and–a point of family pride–an anti-racist activist. Specifically, he spoke at many churches against California’s 1964 proposition 14, which would allow people to discriminate by race when selling housing.

At the time I became an adult, my grandfather was openly nonreligious–the only other nonreligious person in my family that I knew of at the time. He called himself a deist, believing in a god that does not intervene in the world, and which does not require any worship. Perhaps for that reason he was the only relative who took extended interest in my blog, which was more atheism-focused at the time. Despite several disagreements, we had many positive interactions.

But over ten years ago, I came out as ace and gay, and then I learned that my grandfather was homophobic.

END_OF_DOCUMENT_TOKEN_TO_BE_REPLACED

Pie That’ll Kill Ya: The Problem with Fandom Statistics | Franzeska Dickson (video, 5 min) – On the subject of fandoms, a lot of our intuition is informed by the AO3 community, which features a great deal of slash, and m/m slash in particular.  Franzeska argues that this is not representative of fanfiction in general.  AO3’s detailed tagging system for pairings tends to draw more people who are interested in m/m slash, go figure.

An “Ex-Detransitioner” Disavows the Anti-Trans Movement She Helped Spark | Slate – This article highlights stories from a few people who detransitioned but also reject the way that detransition narratives are used to attack trans people.  Detransitioners are a fairly small group with very complicated and personal journeys, and their stories get amplified and simplified in the name of attacking trans people.  I don’t want to amplify these narratives beyond reason, but I think it’s important to establish a route by which people can detransition without being transphobic–in the same way that we’ve established that individuals can stop identifying as bisexual without having to believe that everyone‘s bisexuality is just a phase.

END_OF_DOCUMENT_TOKEN_TO_BE_REPLACED 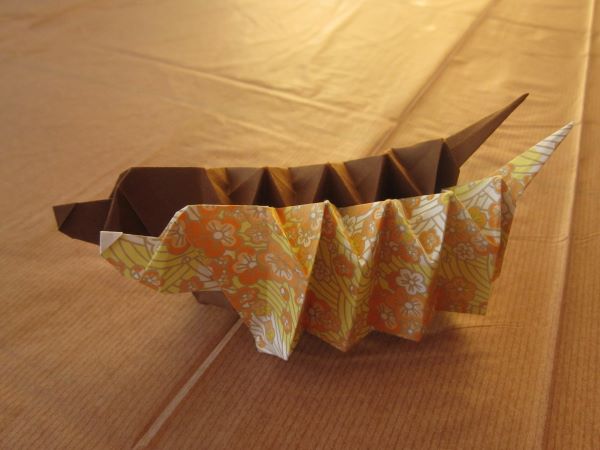 I made these dachshunds as part of the local origami club, and I love them.  I made two, and they immediately reminded me of the two dachshunds that my aunt owned, one light-haired the other dark-haired.  Those dogs always seemed attached at the hip, and were rather codependent.  So, I decided to attach these two at the hip.  I don’t remember how I did it, something to do with pulling out excess paper hidden inside the models.

My mother has owned dachshunds all her life, so I gave these to her as a gift.  Happy Mother’s Day this month!

(For those who didn’t know, “dachshund” is the spelling, but it’s pronounced like “doxin”.  They may also be called doxies or just weiner dogs.  I grew up with these dogs but it took me forever to learn how to spell their name.)