cn: it’s about sex positions, but it is not graphic

I hate the top vs bottom dichotomy as it is used by gay/bi/queer (GBQ) men. If this is something that you like to use for yourself and to understand others, that’s well and good, and I will not deny it to you. But there’s a lot of stereotyping and politics that goes into it, and it’s obnoxious from the perspective of a person who prefers to opt out.

First, at the risk of overexplanation, I should make sure everyone is on the same page. “Top” and “bottom” refer to sex positions, with top being the penetrative position, and bottom being the penetrated position. They can also be used as verbs, or to people. A top is someone who prefers the top position or takes the top position, and a bottom is someone who prefers the bottom position or takes the bottom position. If someone swaps positions, or doesn’t have a preference, that’s called “versatile”, or “vers” for short.

The top/bottom dichotomy is primarily used in the context of men who have sex with men. However, it is occasionally used in other contexts, and the fandom context is of particular note. I mention this because I’ve found that some readers were only familiar with the fan context, and did not realize that I was talking about a real world concept. So, for the fandom folks, at the end I’ll include a discussion of the top/bottom dichotomy in a fan context.

END_OF_DOCUMENT_TOKEN_TO_BE_REPLACED

What is the shape of a raindrop? Going by the common raindrop symbol, you might think it’s round on the bottom and pointy on the top. In actuality, they are spherical when small, and become more pancake-shaped at larger sizes. The biggest raindrops make parachute shapes before breaking up into smaller drops (see video). So that’s an interesting, if not particularly useful, scientific fact.

So the next question is, do you feel misled by the raindrop symbol? Are you incensed by the misinformation?

So this is another one of those posts where I look back at the atheoskeptical movement, and talk about things that have bugged me for a long time. I’m thinking back to an old skepticism website, which used this as its symbol:

END_OF_DOCUMENT_TOKEN_TO_BE_REPLACED

I’m doing one last game diary, and I’ve already decided that next month I’ll move it back to my other blog.  Or maybe I’ll stop entirely, and invest more time in my other hobbies, like blogging.  In any case, please enjoy this commentary on several games all across the spectrum.

So I was browsing the LGBT tag on Steam, which isn’t exactly a cohesive category, but an interesting way to get a random selection of games. You get a few big budget games like Life is Strange, and a whole lot of dating simulators and visual novels. And I was thinking, “Where are all the LGBT puzzle games?” I’m being facetious, but I also have in the back of my mind that one game about fitting a poly triad onto a bed (Triad, if you want to look it up). But then I saw this game.

Salad Fields is a queer furry game that combines difficult sokoban puzzles with a surreal setting and story. Visually, it juxtaposes pixel graphics with 3D art that resembles abstract sculpture. Narratively, it’s mostly a bunch of disconnected stream-of-consciousness dialogues. The dialogues are not usually directly related to queerness, but they reflect the cultural values of (I presume) the authors’ personal experiences as queer furries–most every character is a weirdo and knows it, and there’s also an open and relaxed attitude towards sex.

END_OF_DOCUMENT_TOKEN_TO_BE_REPLACED

How Facebook got addicted to spreading misinformation | MIT Technology Review – Since Cambridge Analytica, Facebook has made efforts to make their algorithms more responsible.  However, it seems they ended up focusing on AI bias, which is surely a worthy problem, but distinct from the problem of Facebook feeding polarization and extremism.  The problem is that fighting polarization and extremism is anti-engagement and anti-growth, and simply not in Facebook’s interests.

Transsexual, Transgender, Trans… and that damn asterisk | Pervert Justice – Last month, I had some tangential discussion of “trans*”, which had briefly become popular in the early 2010s, and suffered backlash after a few years.   Crip Dyke explains how its history goes much further back to the 1990s.  And indeed, the term did make more sense at the time, when transsexual and transgender were more distinct categories, and more care was needed to navigate trans* politics.

END_OF_DOCUMENT_TOKEN_TO_BE_REPLACED

Here’s a collection of experiments, mistakes, and other odds and ends among my origami photos 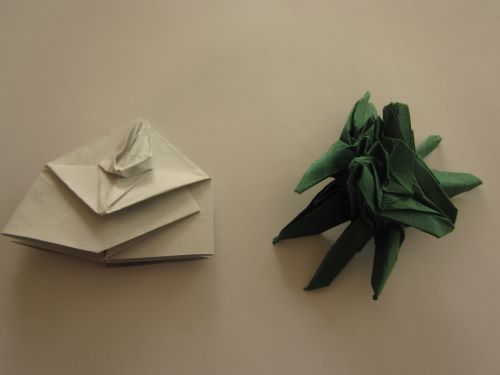 These were my first two attempts to make a tarantula (final version here).  I didn’t expect to get it right the first time, this is all part of the process.