This is a little series where I talk about games that I’ve been playing lately. I had this series on Pillowfort, but moved it here while Pillowfort is down. I haven’t decided whether I’ll keep it here when Pillowfort returns.

Spiritfarer is a game about death. Your role is to ferry the dead to their final rest, listening to their stories and completing tasks in the mean time. The impact of death is also mechanically enhanced by having each character teach you some new mechanics, which continue to be associated with that character even after they are gone. I explained this premise to my husband, and he balked. “Sounds horrible.”

END_OF_DOCUMENT_TOKEN_TO_BE_REPLACED

This month, we passed our pandemicversary, or as I like to think of it, our annivirusary. This occurs on a different day for different people. For me, it’s when March Meeting, the largest physics conference in the world, was cancelled on March 2nd. The pandemic caused major changes in many of our lives, often not for the better. But, I’d like to reflect back on the lighter and more positive aspects.

1. I started exercising. At first, it was because my husband could no longer use the gym, so he bought some home gym equipment. Later, my mother started teaching Zumba online.

END_OF_DOCUMENT_TOKEN_TO_BE_REPLACED

The monthly link roundup is just a few links this time.  But first, a plug to the journal club that I organize monthly.  Last month, we read an article about incels and asexuality, and I thought some readers might enjoy that.

What it was like to be a doctor during the AIDS crisis | Psychology Today – Alan interviews a doctor.  I’m way too young to remember the AIDS pandemic (ongoing though it is), but its impact on gay culture is immense, so I value these primary historical accounts.

Tracing the Roots of Pop Culture Transphobia | Lindsay Ellis (video, 59 min) – Isn’t it odd how transphobes fixate on this narrative of trans women assaulting women in bathrooms?  I mean, it’s not impossible, but it’s a rather unrepresentative view of oh wait they got it from the movies, didn’t they?  I remember when vomit reactions to trans women was a common trope.  And when I remember this, I think, fiction is such bullshit, we should stop making fiction forever.

Old Scott Alexander email links him to the alt-right | r/sneerclub – It’s drama that you’d only care about if you’re familiar with the Rationalist community.  There was a hullabaloo in the Rationalist community because the NYT published a mediocre article on Scott Alexander.  Then someone leaked a private e-mail from Scott Alexander in 2014 where he expresses his belief in HBD (what we’d call race science), among other ridiculous things.  I thought we already knew Scott was into race science?  My favorite part was where he says he can’t dismiss things that sound absurd, because he believes in cryonics!

BTW some FTB oldtimers may recognize the recipient & leaker of the e-mail under a different …uncredible… name.

END_OF_DOCUMENT_TOKEN_TO_BE_REPLACED

It’s time for another trip to the ruins of New Atheism, to scavenge for clues about its downfall. Today we examine Poe’s Law, an adage that states that there is no parody of religious fundamentalism so extreme that it won’t be mistaken for the real thing.

This episode was inspired by a video by Sarah Z (1 hr), about a seemingly unrelated topic: made up stories on Tumblr. The central thread in her video is an obviously fictional story on Tumblr about a woman giving money to a homeless man, and being interrupted by a fedora’d dipshit. And with one thing and another it ends with a Gangnam Style dance number.

This tumblr story was posted to Reddit, where it was a joke about tumblr SJWs make shit up to reinforce their own persecution complex, and have so little attachment to reality that they believe their own nonsense.

The story isn’t just fake though. It’s a fake fake story. The story was not created by a tumblr SJW, and was in fact never posted on Tumblr in the first place. The screenshot was engineered by an apparently anti-SJW redditor who habitually created fake screenshots along similar lines. So in truth, it’s a story about how anti-SJWs make up shit to reinforce their own worldview, and have so little attachment to reality that they believe their own nonsense.

END_OF_DOCUMENT_TOKEN_TO_BE_REPLACED 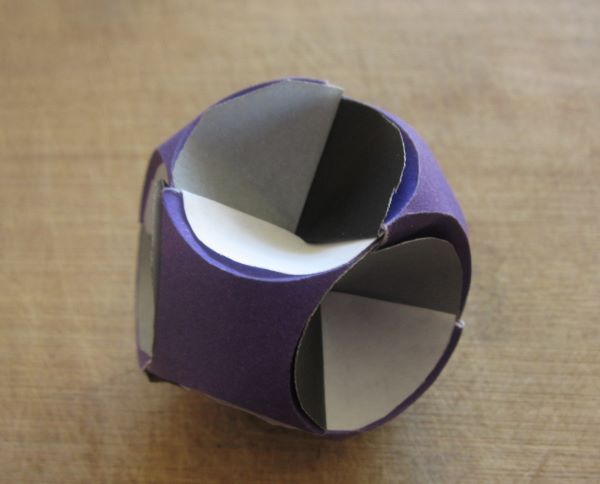 Business Card Origami Orb, designed by Jeannine Mosely, with modification by me

This model has instructions online, and is one of the easiest curved-crease models to create.  It just requires six business cards or some other card stock paper, and some means to draw circles.  The instructions suggest using a compass or a template, but I just used a poker chip that I had on hand.  Once you draw the circles, you should score them, which can be done by pressing hard on a ballpoint pen.