A Moiré pattern is the interference pattern that emerges when you superimpose two grids that nearly line up. For instance, you could have two identical metal sheets with circular holes. If you put one in front of the other, and slightly rotate it, then you get a Moiré pattern. 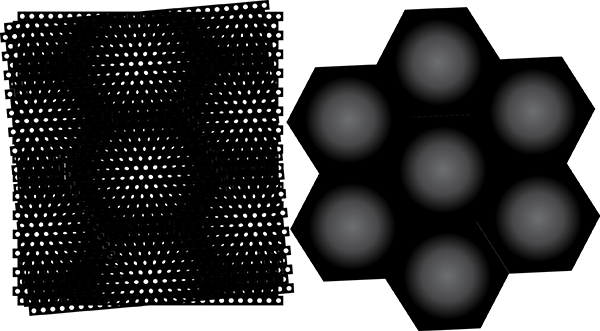 Left: a Moiré pattern formed by two hexagonal grids of circular holes, one rotated by 5 degrees. Right: an artist’s (my) conception of the resulting Moiré pattern. This and all other images were drawn “by hand” (with Illustrator), so please accept some imperfection.

A reader expressed curiosity about what would happen if you replaced the circles with a different shape. As it happens, I am a former condensed matter physicist, which makes me a sort of expert in lattices. So I already know the answer, but let me walk you through with illustrations.

END_OF_DOCUMENT_TOKEN_TO_BE_REPLACED

Before I move away from the topic of Rationalism and EA, I want to talk about Roko’s Basilisk, because WTF else am I supposed to do with this useless knowledge that I have.

From sci-fi, a “basilisk” is an idea or image that exploits flaws in the human mind to cause a fatal reaction. Roko’s Basilisk was proposed by Roko to the LessWrong (LW) community in 2010. The idea is that a benevolent AI from the future could coerce you into doing the right thing (build a benevolent AI, obv) by threatening to clone you and torture your clone. It’s a sort of a transhumanist Pascal’s Wager.

Roko’s Basilisk is absurd to the typical person, and at this point is basically a meme used to mock LW, or tech geeks more broadly. But it’s not clear how seriously this was really taken in LW. One thing we do know is that Eliezer Yudkowsky, then leader of LW, banned all discussion of the subject.

END_OF_DOCUMENT_TOKEN_TO_BE_REPLACED

As readers know, I like to take retrospective looks at the New Atheist movement. What can I say, I was involved for ten years and I have grievances. But there’s another adjacent community I think a lot about, even though I was never personally involved: the Rationalist community, also known as the LessWrong community.  I also think about Effective Altruism (EA), a significant spinoff community that focused on philanthropy.

I always had issues with the Rationalist community, as well as personal reasons to keep my distance. But looking back, I honestly feel like Rationalism left a better legacy than either the Skeptical or New Atheist movements did, and that legacy came in the form of EA. I keep my distance away from EA, but at the end of the day they’re doing philanthropy, and encouraging others to do philanthropy, and I really can’t find fault with that.

END_OF_DOCUMENT_TOKEN_TO_BE_REPLACED

This is my (semi-)monthly repost.  This review was originally published in 2015.

Harry Potter and the Methods of Rationality (HPMOR) is one of the best-known pieces of fanfiction ever written, meaning it was even read by people like me, who otherwise despise fanfic.  This is my (spoiler-free) review.

I should begin with the caveat that I hardly remember most of HPMOR.  Like much of internet fiction, it has updated very slowly over a long period of time.  I started reading HPMOR over three years ago, and I know because there’s something in my blog archives about it.  Frankly it would have been better suited to reading over a short period of time rather than a period of years.  But this is hardly relevant now, because the fanfic has now been completed and you can read it at your leisure.

END_OF_DOCUMENT_TOKEN_TO_BE_REPLACED

In the distant pre-pandemic past, I used to take public transit. Public transit is a fascinating place where you meet people from many different walks of life. Just kidding, nobody talks to each other. This possibly varies from culture to culture, but in my experience people mostly want to mind their own business on public transit.

When strangers do talk to me, that’s alright with me, but my expectations start super low. The most common kind of comment I get, is basically homophobia. Another kind of comment is people saying that my husband and I are a cute couple–innocent enough but vaguely objectifying. Then there are the comments that I just don’t understand. I have auditory processing issues, and it can take a while to acclimate myself to someone’s voice before understanding them. But it’s hard to explain that to a stranger, and it’s not like I wanted to talk to them in the first place.

There’s a similar interaction that happens online: getting comments from randos. By “rando” I’m referring to people that for whatever reason, come across my internet writing–often via internet search. Typically they only read one article, months or years after its publication, and probably not even the whole thing. Comments from randos can be better than comments from strangers on a bus, but they usually are not. Randos systematically produce the worst comments I get.

Basically every blogger has the same experience, so I’m just explaining this for the benefit of people who don’t blog or haven’t blogged enough to attract randos.

END_OF_DOCUMENT_TOKEN_TO_BE_REPLACED

Last month, I relaunched the Ace Journal Club.  We discussed a psychology paper, and next month we’re discussing a gender studies text.  Not of interest to most readers, but it’s a thing that is happening.  I also started a series about split attraction models on The Asexual Agenda.

Also, in case you missed it, Crip Dyke was at the Portland protests!  You can start here and go forward.  Or if you read just one thing, you can read about the worst night.  Summarized in five words: Tear gas, lots of it.

‘Mum’s day off is it?’: what adopting as a same-sex couple taught us | The Guardian – This article is less about same-sex parenting, and more about the disproportionate labor that mothers perform.  When a kid has two fathers, they’re often presumed to be straight men supporting their wives, and they get praised for doing ordinary parenting.  File this under “Are the straights okay?”

The Women’s-Only Spaces Myth | Reprobate Spreadsheet – HJ examines the history of the Michigan Womyn’s Music Festival, infamous for excluding trans women.  The leadership believed they were protecting attendees from sexual violence, but in fact most attendees did not agree with the decision, and the leadership was guilty of covering up sexual violence perpetrated by cis women.

END_OF_DOCUMENT_TOKEN_TO_BE_REPLACED

This is an entry in my series where I read physics articles in Scientific American, under the theory that having a physics PhD will save me.

This month’s article is “Quantum Leap” about the theory behind the quantum hall effect. Out of all the articles in this series so far, this is the closest to my actual field of study (I was a condensed matter experimentalist who studied superconductors). But I positively groaned when I saw it. It’s bad.

But before I get to the main attraction, I have some general commentary on the August issue. After two months of putting the coronavirus on the cover, SciAm’s cover has finally moved on, now featuring a story about oak trees. The columnists are all still talking about the virus, one about racial health disparities, one about masks, one about science denial. I think these articles are written 1-2 months in advance, so they’re a bit of a time capsule. Wait, aren’t we still talking about all the same things?