Recently, some Republicans have suggested that social distancing measures are not worth the damage they cause to the economy. This was explicitly suggested by Texas Lieutenant Governor Dan Patrick, who wanted to sacrifice senior citizen’s lives. But it was also suggested by Trump who said,

We have two very, very powerful alternatives that we have to take into consideration. Life is fragile, and economies are fragile.

This one’s a real head-scratcher. pic.twitter.com/f0mUAvCk1K

I’d like to take this moral dilemma seriously, for the sake of argument. At the end, I will estimate, just how many Hitlers are we talking here?

END_OF_DOCUMENT_TOKEN_TO_BE_REPLACED

Doomsday Book is a science fiction novel about an epidemic, published in 1992, and read by me in 2015. At the time, I gave it 1/5 stars. Today, it’s the most directly relevant work of fiction I have ever consumed.

This isn’t a proper review, because I can only remember so much from a book I read five years ago, and which I didn’t even like. I’m reconstructing some of my memory based on the Wikipedia summary, and based on the two paragraphs of private notes I wrote for myself.

Doomsday Book is about history grad student (?) Kivrin, in a world where historians perform field work by traveling back in time. Time travel is underpowered here—the timeline simply won’t allow people to travel to a point in time if it would change history. And rather than zipping back and forth through time, Kivrin is preparing for a single trip to medieval England, which is the culmination of her PhD.

END_OF_DOCUMENT_TOKEN_TO_BE_REPLACED

Someone went and got me a subscription to Scientific American, so for the past few months I’ve been covering physics articles, now with the benefit of a PhD. Perhaps it’s a way to keep in touch with my physics roots as my career has moved on to other things.

In this month’s issue, the cover article is “A Cosmic Crisis“, about a discrepancy between two measurements of the age of the universe.

Funny thing, there’s always a letter from the editor in chief where he introduces all the major articles, and here he contrasts the “cosmic crisis” with another ongoing crisis, that thing between US and Iran. Yep, this sure is an article that was written last month! FWIW, I could do with some reading that has nothing to do with COVID-19.

I thought I’d review the article in approximately the order in which I read it: pretty pictures first, walls of text last if at all. For serious, this is the correct way to read a science article, I can say that as a person with a PhD.

END_OF_DOCUMENT_TOKEN_TO_BE_REPLACED

This month’s link roundup is late, and to be honest I hadn’t collected any links until the past week.  And yep, it’s all COVID-19 related.  I see that Skepchick also collected a bunch of links on COVID-19, so I’d check that out too.

Between Panic and Indifference | Red Beard – Red Beard lives near Seattle, right by one of the outbreaks of COVID-19, and gives a personal account of what it’s like.  This article is dated to March 5th, and was a preview of what a lot of us are starting to go through, or will go through.

Why I’m Just So Worried About Our Students | Skepchick – Isis discusses problems faced by university students in the face of school closures.

The Fed’s $1.5 trillion intervention, explained | The Week – My reaction to the federal $1.5 trillion injection was “How much even is that?  Is it like a million?”  I checked xkcd’s money chart and–holy shit!  My husband shared this article, which is a bit too technical for me to understand.  But the key points, if I understand correctly: a) this is a no-brainer to prevent collapse, b) yes it unfairly favors the rich and wealthy, c) but that’s the tool that the Federal Reserve has available to it, d) a fairer way to rescue the economy it would have needed to come from the Trump administration and Congress.

In personal news, I have a job and am now moneyed.  I don’t even know what to do with all this money.  Charity recommendations welcome in the comments.

Last week, amid rising concerns about COVID-19, I was sick. It was no big deal, just a little stomach bug, highly unlikely to be contagious. But I worked from home for a week, out of prudence.

After a week of this, I decided to go in the office again. I had missed the double-monitor setup and the snack room. But the environment was totally changed from before.

On the train, I was paranoid that I would cough or sneeze, and people would shun me or worse. Well you know, it’s allergy season, lots of people are sneezing. And I have asthma, I cough year round. But imagine explaining that to randos on the train, and to be fair I wouldn’t trust a rando explaining the same to me either.

The office was mostly empty. I raided the snack room.

That afternoon, the company announced that it was recommending everyone work from home, for the next week at least. So I went home–after grabbing every perishable item in the fridge.

END_OF_DOCUMENT_TOKEN_TO_BE_REPLACED

Usually around election time I write up a post about what I’m voting for on the ballot. Most things on the ballot are local, and not relevant to most of my readers, but I think it’s important to highlight and normalize the research process for smaller elections. The presidential election is important and all, but in all likelihood you’ve already made that decision so surely you can spare some time to research the smaller elections?

You know what, I want to talk about board games instead.

In games with three or more players, players are often presented with a choice to attack one of their opponents. This opens up a fair amount of strategic space, which board gamers sometimes sometimes refer to as “politics”. Common political strategies include:

END_OF_DOCUMENT_TOKEN_TO_BE_REPLACED 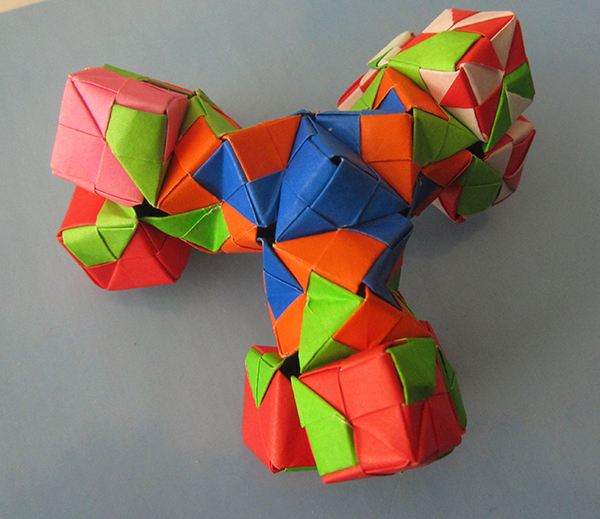 Budding Sonobe, my design, made from Sonobe units

This is one of those origami models that other people seem to like much more than I do.  I think it’s over-designed.

I thought I’d have it recursively branch multiple levels, and at each level one of the branches would have a “mutation”.  You can see the pinwheel design on the upper right branch, the pink cube on the left branch. All this on top of the blue/orange/red/green color scheme.  I didn’t branch very many times because it didn’t seem structurally sound enough, and also I wasn’t too fond of it.  But still, some people like it.  If you like it, maybe you can tell me why.

My guess is that people like it for its intricate design.  I think it uses… *counts to self* …60 pieces of paper, each one 3.75 cm.  The whole model fits in my palm.  Each sheet is folded into a Sonobe unit, which is just very standard and flexible origami unit.  If I were to try it again, I would keep it intricate but reduce the design entropy.