In lieu of my annual music post (my antidote to Christmas music), I’d like to dedicate a post to the drone genre. I will discuss the challenges of drone, how to appreciate it, and share some of my favorite examples, with an eye towards newcomers. Readers are also welcome to skip the discussion and just try the music.

How to appreciate drone

Drones—sustained tones—are one of the oldest musical elements, and appear in all sorts of music. However the present focus is the modern genre of drone, a subgenre of ambient music that prominently features drones. We should also consider adjacent genres such as drone metal, post rock, and shoe gaze; and examples of drone in (20th century) classical music and film soundtracks.

Some music can be difficult because it’s too complex to figure out, but drone tends to be difficult because it seems there is nothing to figure out. It feels like it’s either one note played for ten minutes, or a single phrase repeated ad nauseum for ten minutes. Do fans of drone just like keeping it simple stupid, or is there some hidden complexity you’re missing? Answer: it’s both.

END_OF_DOCUMENT_TOKEN_TO_BE_REPLACED

Freethoughtblogs has re-opened applications for new bloggers!  Join us!  Applications have technically been open all along, but we had a huge backlog, which we are now clearing out.  The following blogs were just added last week: Andreas Avester, From The Ashes of Faith, Impossible Me.

“An Asexual World”: Asexuality in Death Stranding – I wrote an article about some bad asexual representation in a video game.  Cowritten with Queenie, an expert in Japanese culture.

How Using Tumblr is Undermining Your Community – Oh good, Coyote finally made a list of structural problems with Tumblr.  Tumblr has a reputation (in my view an accurate one) for being a home for many queer and SJ-oriented communities, but that does not mean that Tumblr itself is a force for good.  Tumblr has held our communities back, and people don’t even realize how bad it is because they’re swimming in it.

The good guy/bad guy myth – The article discusses a popular pattern in fiction, where one side represents moral good, and the other evil, and argues that this is a historically recent trend.  Based on the examples, it sounds like there are three parts to this trend: morality as a primary subject matter, characters and sides that embody moral values, and black and white morality.  The article takes a negative view on these trends, but I’m not so sure.  IMO, morality is an excellent subject matter for fiction, and using characters to embody values is a fine technique so long as we realize real people aren’t like that.

END_OF_DOCUMENT_TOKEN_TO_BE_REPLACED

“One-sided dichotomy” is a term I would like to coin to describe a common situation in public discourse.

One-sided dichotomies have a tendency to be unfair, because it is only one side controlling the narrative. The narrative goes that second-wave feminists were primarily focused on equality for wealthy white women, while third-wave feminism is intersectional. But closer examination should show that at least some feminisms of the 70s were intersectional, and some feminisms of the present day fail to be so. Does that mean the dichotomy is unfair, or am I nitpicking?  You decide.

I must emphasize that one-sided dichotomies are not necessarily unfair. A model example is the gay/straight dichotomy, which certainly started out one-sided. Straight people would have rejected the label (“I’m not straight, I’m just normal”) or simply wouldn’t have given it any thought. Now the dichotomy is broadly accepted. Another dichotomy currently following the same trajectory, is the cis/trans dichotomy.

END_OF_DOCUMENT_TOKEN_TO_BE_REPLACED 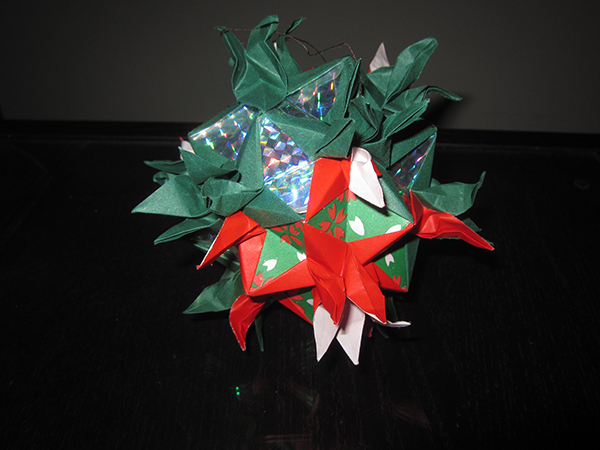 This month, I checked my photo folder for any Christmas-oriented models.  Here’s one, from the days when I couldn’t take good photos, lol.

As you can see, there are four colors of paper: Green, Red (with a white back), silver foil, and patterned green.  The silver foil and patterned green are just small squares inserted directly into the model.  When most people look at this, they think, “Shiny!” but when I look at it I think “Inserts are such a good idea, I should use them more often!”