On the subject of how feminism can do better to help men, one suggestion I’ve heard many times, is that we need to provide better role models for men.

Honest question: what does that even mean? I don’t understand what “role model” is, why I would want one, or how it would solve anything.  To me, “Who are your role models?” is a writing prompt they give you in elementary school, which was endlessly frustrating and never made the least bit of sense.

My frustration is compounded when people go on to suggest specific celebrities to be role models.  For example, “Terry Crews is a great guy, and a great model for 21st century masculinity.”  So, I know Terry Crews as someone who has done work against sexual violence, but that doesn’t make him a role model to me.  I’m confused about how that would even work.  Are you suggesting that I follow news about Terry Crews and imitate what little I can glean of his viewpoints and habits?  The solution to the crisis of masculinity is… more celebrity news?  Color me skeptical.

END_OF_DOCUMENT_TOKEN_TO_BE_REPLACED

Inspired by a comment I made in my last article, I’m making a listicle of common atheist sayings, many of which I had objections to even when I was involved in the atheist movement.

I want to stick to quotes that I’ve actually heard atheists repeating and paraphrasing multiple times.  And, it’s pretty hard to come up with a list like that, because any search for atheist sayings just turns up much more obscure quotes, voted up by… whoever hangs around websites that collect quotes.  So, I’m sure I missed a few, and if commenters identify a bunch then I might make another listicle.

Before I get to the list proper, let’s start with a grumpy take on atheist quotememes.  This is an image search for “atheist sayings”: 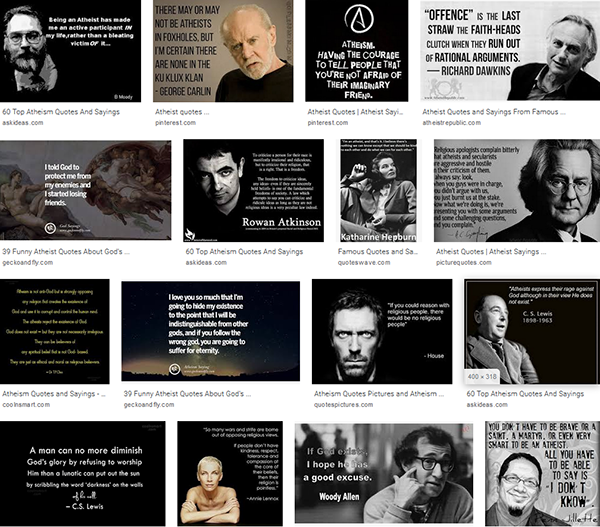 Atheists sure like quotes in overwrought fonts next to shadowed grayscale faces of celebrities.  This felt worthy of parody, so I amused myself by making a Pikachu meme.

END_OF_DOCUMENT_TOKEN_TO_BE_REPLACED

Something I hear people say, is that self-identified atheists, and “new atheists”, are terrible. They’re racist and sexist, and their main mission is to bring about the death of religion through a series of trite “gotcha” arguments. Now, as someone who was involved in “new atheism” from 2007 to 2017, and then quit for some of those very same reasons, I always want to say, “Yes, but also no.”

END_OF_DOCUMENT_TOKEN_TO_BE_REPLACED

This is a repost of an article I wrote in 2014, on the (then recent) Burwell v Hobby Lobby Supreme Court decision, which ruled that owners of for-profit corporations could withhold certain healthcare benefits (i.e. contraceptives) if their owners had religious objections.  I was reminded of this one because of Trump’s recent rule allowing federal contractors to discriminate based on religious views.  While only tangential to the present issue, I thought it was a good explanation of the rationale behind the Religious Freedom Restoration Act, and how one might argue around religious exemptions.

As I may or may not have mentioned before, my boyfriend has a law degree.  So I get to hear a lot of lawyerly opinions on the recent Burwell vs Hobby Lobby decision, both from him and his friends.  And they seem to contrast with the opinions I get from atheist blogs, where there’s lots of panicking about the consequences, but very little explanation of the mechanical details of the decision.

The Hobby Lobby decision was based on the Religious Freedom Restoration Act (RFRA), a federal law from the 90s.  The RFRA says,

Government shall not substantially burden a person’s exercise of religion even if the burden results from a rule of general applicability.

Laws specifically targeted against religions are already unconstitutional, but the RFRA adds religious protection from neutral laws.  For example, if a company bans hats among employees, that is a neutral rule that disproportionately affects certain minority religions which mandate wearing hats.
END_OF_DOCUMENT_TOKEN_TO_BE_REPLACED

END_OF_DOCUMENT_TOKEN_TO_BE_REPLACED

Generally I prefer not to comment on “news”, and I will continue that trend here. But we all know gun violence in the US is bad, right? You don’t need to pay attention to the news to know that! You can just read Wikipedia. (And I’m being lazy in my research to demonstrate just how easy it is to find this stuff.)

This is vastly higher than it is in other wealthy countries, and it’s only gotten higher in recent years.  I used to think that the death rate by guns must be dwarfed by that of car crashes, but no, it’s actually quite comparable (although with a lower injury rate):

Here’s what’s not comparable: number of deaths by mass shootings. If you only pay attention to mass shootings in the news, this will vastly underestimate gun violence in the US.

END_OF_DOCUMENT_TOKEN_TO_BE_REPLACED

I wrote two essays for The Asexual Agenda:

Labels must be allowed to die – It’s about those really obscure orientation labels, some of which are used by more people than you think, and some of which are effectively dead.  I’m not against obscure labels, but I make the case against preserving dead labels.

Lisa Orlando, Author of The Asexual Manifesto (1972) – A historical account of an old essay written in the context of second wave feminism.  We first heard about the essay last year, and we were all wondering what was inside it.  We finally found the essay, and its author, and it’s so exciting.

The Cotton Ceiling: The best argument that TERFs aren’t feminists? – The “cotton ceiling” is about how people are unwilling to date trans women even when they like trans women.  It’s a reference the feminist concept of the “glass ceiling”, but TERFs seem completely ignorant of that fact.  Yeah, so I’ve argued that TERFs are feminists before, but their competency with feminism is pretty bad.  Just the other day, I saw on twitter a leading TERF philosopher claimed that trans lesbians only had the “chutzpah” to self-define into existence in the last 10 years.  She apparently wasn’t familiar with Janice Raymond, who dedicated a whole chapter to complaining about trans lesbians in The Transsexual Empire in 1979.