I have a lot of links this month, so I tried to organized them into themes.

#MeToo is not all there is, and here’s why I’m not sharing my story – When activists like me criticize #MeToo, we’re not just hipsters trying to say, “we were fighting sexual violence before it was cool”.  We’re trying to say that #MeToo was a step forward in terms of reaching a greater number of people, but in some ways a step back in the level of discourse.  This is absolutely to be expected; whenever an important message reaches a new audience, it takes a step back to help people to catch up.  In the public conversation, people keep on asking if #MeToo has gone too far, and my answer is that it hasn’t gone nearly far enough.  This article talks about some things that #MeToo is missing.

Keep Your Acephobia Out of #MeToo, Jaclyn Friedman – Jaclyn Friedman, coauthor of Yes Means Yes, wrote an article about something she felt has been missing from #MeToo: a discussion of survivor’s sex lives, and how sex can be used to heal trauma.  It’s true, this has been missing from the #MeToo conversation, but that doesn’t mean it’s missing everywhere.  For some survivors, the narrative about sexual healing is so dominant as to be oppressive, especially for survivors who are ace.  The sexual healing narrative must be paired with alternative narratives, where survivors do not have sex, and are not dehumanized for it.

When Boys Are Victims of Sexual Assault – This article has several first-person accounts of sexual assault from boys and young men.  It seems that the experience interacts with masculinity in strange ways for many of them.

END_OF_DOCUMENT_TOKEN_TO_BE_REPLACED

There have always been several gaps between new atheists’ self-image and reality. One gap that I have often expressed frustration with, is atheists denying that any atheist movement exists. You could argue the details about what it means to have a “movement”, but I heard such comments coming from people participating in atheist student groups in the heyday of new atheism.  It’s a stubborn refusal to engage in self-understanding, a denial that there is any self to understand.

But today I want to talk about another gap. Atheists see themselves as having no heroes or leaders, and yet atheist celebrities are everywhere you look. This is a point that often comes up whenever an atheist celebrity falls from grace:

“Skeptics and atheists like to think they are above human foibles like celebrity worship,” Rebecca Watson, a prominent feminist skeptic, told BuzzFeed News. “In a way, that makes them particularly susceptible to being abused by their heroes. I think we see that over and over again.”

This is a problem composed of two opposites: (a) atheists see celebrity worship as a human foible that they have escaped, and (b) atheists are more susceptible to celebrity worship. And there are two opposite responses to the problem: (a) the tendency towards celebrities should be acknowledged, or (b) we must strengthen our resistance to celebrities.

END_OF_DOCUMENT_TOKEN_TO_BE_REPLACED 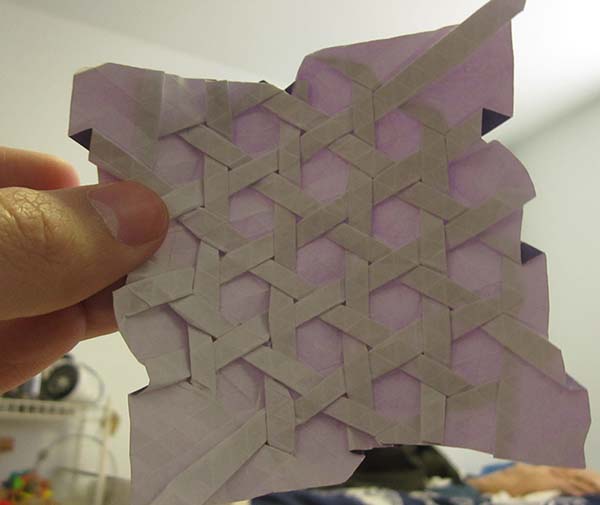 This comes from Eric Gjerde’s book, Origami Tessellations, although Gjerde says it’s a “common design”.  It was one of the earliest tessellations I made, apparently dating to 2014.  They were quite challenging to make at first.  It might be interesting to fold another one just to see how much I’ve improved.

I remember people being very impressed by this one.  I’d tell people, no it’s just one sheet of paper.  The strips of paper that appear to be woven together are not actually continuous, that’s just an illusion.